COMPILE for C/C++ with LUA-based XMAKE

A Lua-based cross-platform build utility. Which also works for other programming languages like: Rust, Go and others. 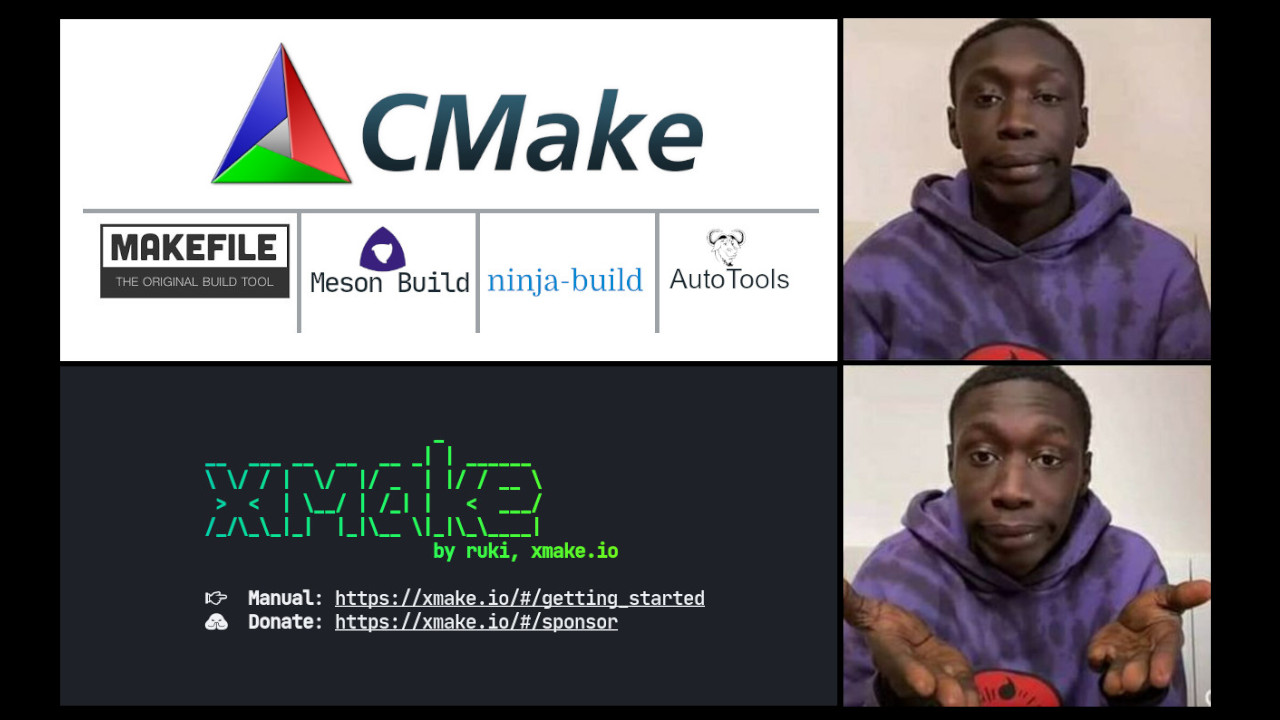 A Lua-based cross-platform build utility. Which also works for other programming languages like: Rust, Go and others.

xmake is a binary building tool for C and C++ languages with configuration files created with the Lua programming language.

xmake is simple, fast, light and has several tools included that facilitate the installation of binaries and has been adopted very quickly by programmers.

It has support for architectures: x86 64 and 32-bit, arm64, cross-toolchains and others. And also support for several operating systems, such as:

It also supports the varied list of toolchains, such as:

And among others!, plus many additional features!

In several tests performed it performed faster than ninja and cmake .

It is very easy to install xmake and there are several ways. The simplest is accessing the xmake website: https://xmake.io and note that you can install without sudo permission with:

This way of installation is more interesting for you to inform in a README.md for the user to install quickly and easily to compile some project of yours that uses xmake.

But this way, despite working very well, limits the use of some xmake parameters, for example parameter: install.

So let’s install via Git for that we’ll need compile-time dependencies:

Now let’s clone the repository (in the upper right corner of the site there is a link):

Enter the directory and install the submodule for LuaJIT:

At the end we will install:

Now let’s create the autocomplete for the xmake command:

To make sure the autocomplete runs too:

#1. Basic build from scratch To get started, let’s look at the most basic way to use xmake.

Let’s create a directory of an example project, enter it and create the file: main.cpp:

Now let’s create the Lua xmake configuration file: nvim xmake.lua and inside it we’ll fill it like this:

If you want to install the binary just run the command:

The binary will be copied to the default directory: /usr/local/bin.

And then just run the binary:

#2. Basic AUTOMATIC Build If you find it laborious to create the project files by hand, there is also an option for you to hand over all that work to xmake. For that, let’s remove this [my-project] that was just an example and let’s recreate it dynamically

If you do not enter the name, but have it inside your project’s name directory, a subdirectory of the same name will be automatically created.

Now let’s go into the directory and notice that everything is ready, if you want to open the files to see the content.

And now instead of installing, let’s automatically generate a Makefile for our project:

We can also generate configuration files for other cross platform tools like ninja and cmake, for example by creating a CMakeLists.txt:

mkdir windows && cd windows Let’s use the example of this link: https://terminalroot.com.br/ncurses/#8-janelas . The xmake.lua will look like this:

According to the Gtkmm series we made, I updated the repository and the README, that is, just go there, read the README and see the file: xmake.lua:

The xmake.lua file from this repository corresponds to the Makefile(which we created in the Gtkmm series videos):

In addition to several other programming languages as we said.

6. Create a template for Doxygen

Running in a subshell:

#10. Getting more information from commands

The video is in Portuguese, but you can see the commands as they are universal!

It is a modern and very interesting and promising tool that is worth using.

For more information visit the website and explore the documentation.