This is the second article in our series, lets find out how things work in migration! 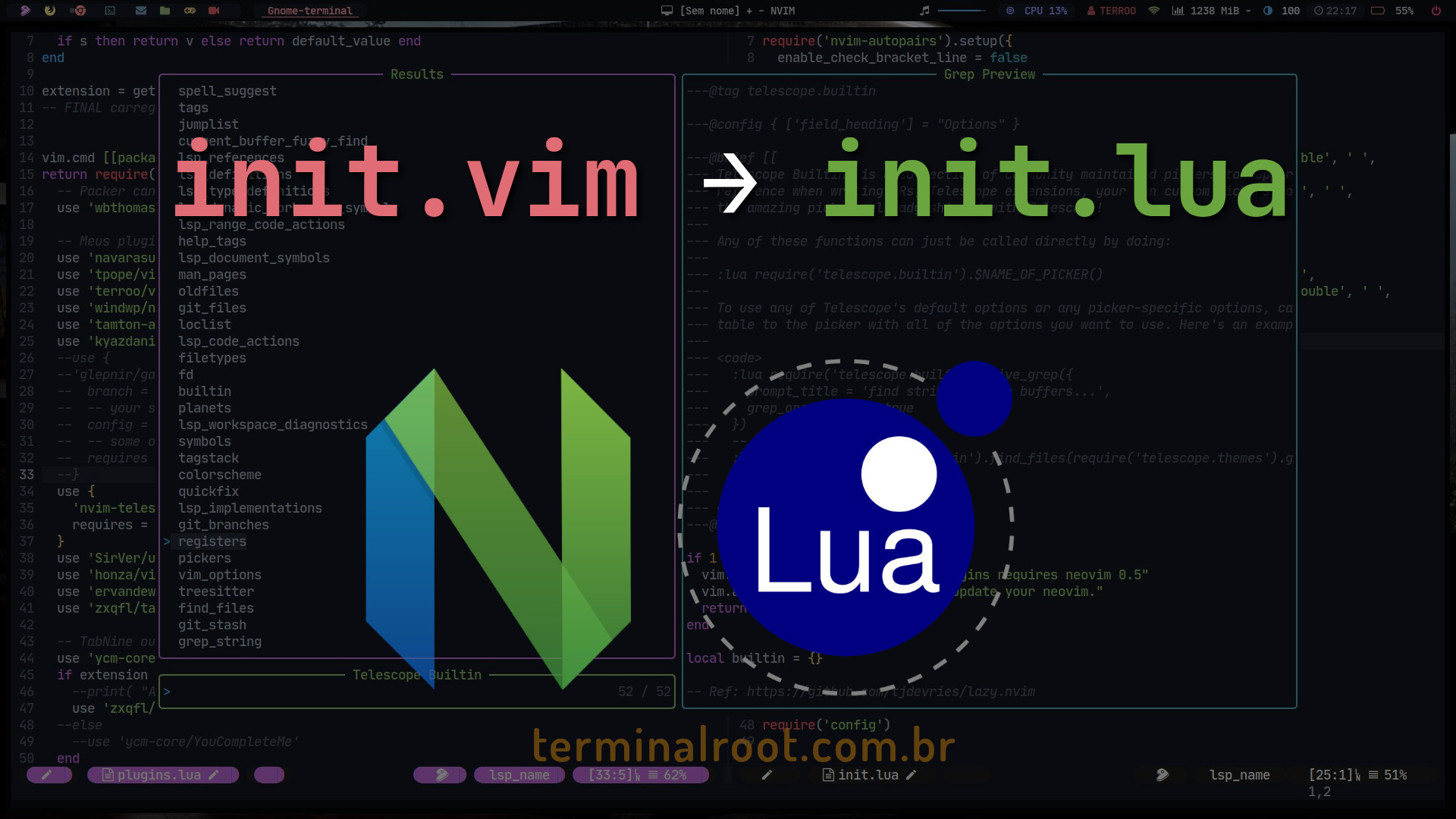 This is the second article in the series All about Neovim with Lua, if you haven’t read the previous one follow the link here.

Tip: if you have the nvim directories in both ~/.local/share and ~/.config remove them or backup them because here we will show them from scratch. Example:

We all know that the main configuration file of Vim is ~/.vimrc and its corresponding file in Neovim is ~/.config/nvim/init.vim .

That is, if we create a symlink from vimrc to init.vim your Neovim will work normally as your Vim works and you will also port all settings and plugins to Neovim.

But what if you want to run Lua from this init.vim is it possible? Yes, for that you will need to use Here String .

Example, let’s suppose you want to display a message in the footer as soon as you open Neovim, but that message needs to be delivered with the Lua programming language. You just add this code to your init.vim:

Can you do that with Vim too? If you have compiled your vim with Lua support or added the vim-lua package for systems offering binaries, yes it is possible! But Vim makes a bridge whereas Neovim is native, that is, there is already a good difference and in Vim you should use it like this (as a command): :lua <<EOF with two dots in front.

But instead of using Here String you can use Lua directly, and this must be done in init.lua. To use it, remove your init.vim and create an init.lua.

Note: Don’t rename or use both (there will be an error) because now the reverse doesn’t work either, that is, VimScript commands don’t run directly in init.lua.

And to display that same message, just do it like this:

As we had said in the previous article in this series, Neovim uses the Vim API to deliver the results or query commands and execute them, and in this case it uses the vim.cmd API.

So, with Lua just run like this, for example, make the Beam cursor in normal mode, add this to your init.lua:

You can put all of your Vim settings into this function which will work normally.

If you want to create a separate file with your settings and import it to your init.lua it is more organized, for example: create a file settings.lua and in your init.lua just add this line:

The most correct thing is to create a directory with the name lua/ and inside it put all the files that will be imported by init.lua, example:

And init.lua will automatically read settings.lua even without specifying the directory because this is part of the 'runtimepath', that is, this directory named lua/ is part of the pattern.

You can organize it however you like, but there is a default organization. At the moment we still don’t know everything we’ll need to create, but in the next articles we’ll see more details and Neovim’s documentation proposes this hierarchy of organization:

Note: That in this hierarchy the init.vim file is kept, but there is an init.lua inside the lua directory, but this is based on if you are not already using init .lua as main, that is, this is for the transition phase and of course this is the default, but not necessarily a rule.

Here in our series we are going to do similar, but not the same, because not all of these files will be used.

Creating your Lua function in Neovim

At this point you are already thinking about how to deliver VimScript results to Lua. For example, in this article we get the extension of the file that opens every time we use the editor to choose which plugin to load.

Let’s create a new file in the lua/ directory named nvim lua/tools.lua and inside it we’ll put this code:

Review the comments in the code for greater understanding.

Now open your init.lua and import tools.lua like this only:

Now any file we open with Neovim it will tell us the extension at the footer. Simple, right?!

This example was very basic and easy, especially if you already know Lua, but the plugins use a lot of tables and metatables, however, it doesn’t escape much of simplicity!

For more information run on your Neovim: :h vim.api .