I decided to document a modern and very simplistic test that I created with GNU Autotools.

Although there are some other alternatives to GNU’s automatic tools, GNU Autotools is still the most widely used in the world for reasons of confidence in the end results. That is, experience has led to this stability.

Unfortunately, there is a lot of obsolete documentation on the internet about Autotools and a lot of complaints about automated tools, so I decided to document a modern and very simplistic test that I created and I will share with you this experience that I made sure to make it as basic as possible. in order to reach understanding.

But still, be sure to display examples that work in larger projects, which by the way the idea is the same, just need a little more attention in the settings.

This article will be summarized in:

All topics have been separated with Step by Step and Lists sorted for ease of understanding.

4. Theoretical explanations of each command and file

6. Bash scripts (make it easy to note the steps)

It can be difficult to make a software program portable: the C compiler differs from system to system;Some library functions are missing on some systems;Header files may have different names.One way to deal with this is to write conditional code, with code blocks selected using preprocessor directives (#ifdef);But due to the wide variety of building environments, this approach quickly becomes unmanageable. Autotools is designed to solve this problem more easily.

Autotools is part of the GNU tool chain and is widely used in many open source and open source packages. Its component tools are licensed by free software under the GNU General Public License, with special license exceptions allowing their use with proprietary software.

The GNU Build System makes it possible to create many programs using a two-step process: configure followed by make.

Part 1: Setting Up the Test Files

Or use a preferred text editor, for example: Vim . In the end my file looked like this:

1 new directory and 1 new file were created: autom4te.cache/ and configure .Their contents are extensive, configure for example has 3549 lines .

If you want it to be easier, just use this command below ( Sed ):

The output will look something similar or the same (if you used the files in this tutorial) to:

Note the line: configure.ac:8: error: required file ‘config.h.in’ not found , if this also appears to you, run:

If you want to make sure everything is fine, run ./configure , make and test program execution: cd src/ &amp;&amp; ./teste , the output will be: Just a test for Autotools .And if you want to install on the system, run:

Since you have sudo installed and are part of the group, otherwise make install only work with root .

To uninstall you will need to be in the testes/ directory and run the command:

Absolutely EVERYTHING will be uninstalled, the output will be similar/equal:

Part 3: Preparing Files or Generating Everything via Shell Script

If you want to see everything we’ve done here, use pre-made files or run a simple Bash script:

And use the pre-created environment files: gnu-autotools/testes/ or simply run the script that creates the files from scratch: ./gnu-autotools.sh

Or generate everything including Autotools commands via script with the file: ./gnu-autotools-full.sh 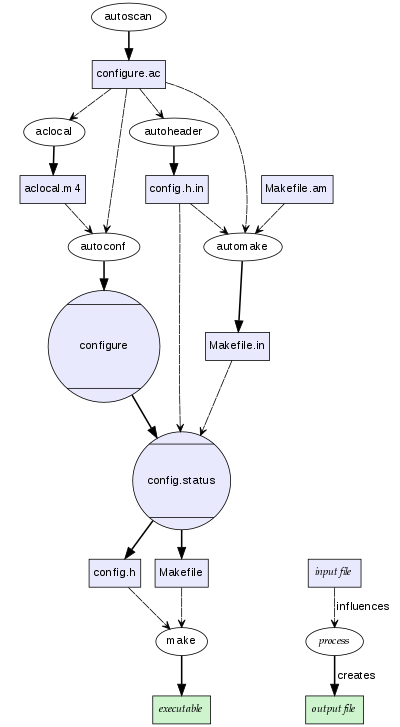