We are going to use packer.nvim to install plugins like Telescope and others

This is the third episode of the series All about Neovim with Lua if you haven’t read the previous ones, follow the links:

First of all, let’s organize our files and define all the settings (based on mine I use daily).

The lua/tools.lua file was just an example, so we can already remove it and the lua/settings.lua file we will put inside a directory named configs/ that we will create to be more organized.

Clean your init.lua first to not show errors:

Now use my settings.lua or modify it however you like:

Note: You can also use a single vim.cmd to run all the settings, but this has no impact on performance.

Most of these settings for those who use Vim already know what it is, if you don’t know see this article . Then close and reopen your Neovim to see the changes, we’ll change just 3 more lines of that file when we install a color theme!

packer.nvim is a plugin that installs plugins! It is similar to plugins like vim-plug and Vundle that are used in Vim.

Its differential is that it was entirely written in Lua in addition to using resources from LuaJIT to compile and features plugin update, removal, more accurate and detailed UI interfaces. For all his resources see the repository .

It installs plugins written in both Lua and VimScript and runs normally!

To install, just run this command:

Note: You need to have Git installed.

For Unix and GNU/Linux systems

Copy and paste to your terminal and press [ENTER]

After cloning now, let’s create a new directory inside lua/ and let’s create two new files with the contents that we will indicate.

Create and open the file that will hold the packer installations:

The use function determines which plugins will be used/handled.

Note that packer.nvim handles itself and we take the opportunity to start it by installing two new plugins:

packer.nvim has the following commands:

Now just open your init.lua at the root of your Neovim’s configuration directory and add this line:

Now close and open init.lua again and run the command:

It saves the files in the directory: ~/.local/share/nvim and the plugins are in the subdirectory: site/pack/packer/start .

And once you finish run: :PackerCompile. You can automate :PackerCompile for every time there are new installs, if you want to add this line to your settings.lua:

It will install the plugins and we can already use them! To activate the color theme open the file: nvim lua/configs/settings.lua and add these 3 lines to the end:

When closing open any file (Ex.: nvim main.cpp) and notice a nicer look! 😃

If you want an even darker background change the line in settings.lua that has this content: vim.cmd([[ colorscheme onedark ]]) with this:

For more “sub-themes” tips from onedark.nvim (in addition to darker) see the repository.

To use vim-simple-emoji see the tips in the repository.

Telescope.nvim is the latest, it is a better alternative to fzf.

It has a modern interface and serves to: Find, filter, view, select and open files simply and quickly. It was also written entirely in Lua.

To install it, add this line to the file: plugins/plugins.lua

Note that nvim-telescope has a dependency on nvim-plenary so we use packer.nvim’s own settings for this!

A “window” will open in the bottom combo you can type the name of the file you want to manipulate, for more details see the repository .

See the Telescope output below: 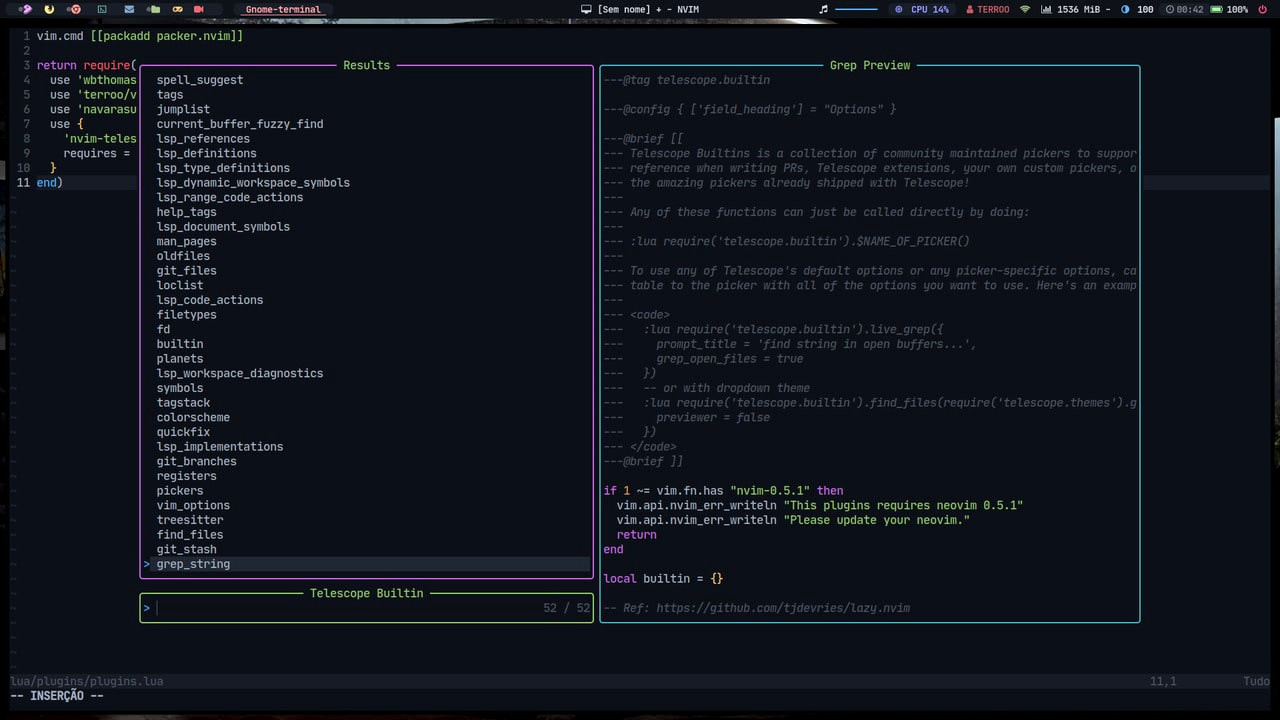 To end this episode, I’ll leave the mapping file that I use every day. Create a file:

Read the comments and change it any way you like, and then don’t forget to call it in your init.lua