I created a list of the maximum number of browsers I found available for GNU/Linux. 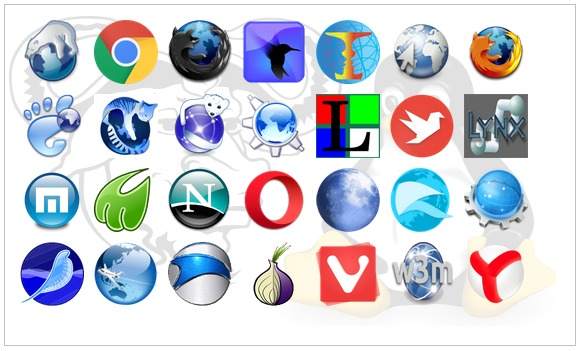 I created a list with the maximum number I found of browsers available for GNU/Linux. Below are the NAMES, DESCRIPTION and DOWNLOAD LINK. I hope it is useful!

Mozilla Firefox is a free, cross-platform browser developed by the Mozilla Foundation (in Portuguese: Mozilla Foundation) with the help of hundreds of contributors. The foundation’s intention is to develop a lightweight, secure, intuitive and highly extensible browser.

Firefox Developer Edition is a version of the Mozilla browser created especially for developers, bringing a number of additional tools.

Iceweasel is an open source Internet browser exclusively for Linux distributions based on Debian. It is identical to Mozilla Firefox, which cannot be distributed together with Debian because it has the brand and icon patented by the Mozilla Foundation, since the content distributed with Debian must be completely free. The name was proposed in opposition to the meaning of the word Firefox (literally, “fire fox”, one of the names of the red panda). “Iceweasel” literally means “ice weasel”.

Slimjet is a web browser based on the Google Chrome source code, more specifically in the Chromium project, which produces an alternative version of Google’s browser, but with practically all the original functions. After Google Chrome no longer has a 32-bit version for Linux, Slimjet serves to replace it.

Google Chrome is a browser developed by Google and compiled based on licensed code components such as Apple Inc.’s WebKit rendering engine and its application development framework (Framework).

Tor (formerly an acronym for The Onion Router) is free and open source software to protect personal anonymity when surfing the Internet and online activities, protecting against censorship and protecting personal privacy. Most GNU/Linux distributions offer Tor packages.

Maxthon Cloud Browser download. Browser that mixes the appearance of IE and Firefox with the structure of Google Chrome.

Vivaldi is a free browser developed by Vivaldi Technologies, a company founded by co-founder and former CEO of Opera Software, Jon Stephenson von Tetzchner and Tatsuki Tomita. The browser has, as target audience, advanced users and former users of Opera Browser, who were dissatisfied with the transition from the Presto engine to Blink, in which several popular features were removed.

Brave is a free and open source web browser developed by Brave Software Inc., and based on the Chromium web browser. The browser blocks ads and website crawlers. In a future version of the browser, the company proposed the adoption of a pay-to-surf business model.

Browser identical to Firefox, but recompiled and with functions disabled for performance gain.

Liri Browser is a new multiplatform browser, developed with the Chromium engine and focused on Material Design for its interface and animations.

Dillo is a minimalist browser particularly aimed at older or slower computers and embedded systems.

w3m is a free software/open-source web browser based on text and pager of the terminal. It has support for tables, tables, SSL, color and inline images on suitable terminals. Generally, it processes pages as faithfully as possible to its original layout.

Midori is an Internet browser that uses WebKit to render your pages. This browser is little known, but highly recommended for those who want a light and efficient browser. It is multiplatform, works on different operating systems. It is part of the Xfce graphical environment and is not essential for its operation. Its default search engine is DuckDuckGo.

Lynx is a web browser created by the University of Kansas, through its Distributed Computing Group and the Academic Computing Service. It is capable of displaying text only, ideal for console-based systems or with few graphics resources. Accompanies several distributions of POSIX systems (Unix, Linux, etc.) and VAX/VMS. For use by the Terminal.

Links is a free/open source graphical and command line web browser with a menu system. [2] It renders complex pages, has partial support for HTML 4.0 (including tables and frames [3] and supports the configuration of multiple characters such as UTF-8), supports colored and monochrome terminals and allows horizontal scrolling.

QupZilla is a free browser created by a community of developers using the Qt platform. With it, you can do practically everything possible with Mozilla Firefox, the browser he was most inspired by, with some extra options.

Dooble is a multi-platform browser, which has performance, stability and integrates download manager, email client and search bar. It has its own built-in Search Engine and Messenger. It is also a file manager, like Konqueror. Dooble download

Galeon is an alternative Internet browser for the GNOME environment, based on Mozilla. Virtually all Linux distributions have Galeon in their repositories. Its proposal is to be simple and fast. Currently it is possible to use all Firefox plugins in Galeon, and therefore almost nothing is lost when using it.

SRWare Iron is a modification of Google’s browser source code. The main changes were in the components that collected usage data. It has closed source code.

Epiphany (now called the Web after the 2012 version) is the free browser for the GNOME project. The browser is a descendant of Galeon. The program’s renderer/layout engine is WebKit, the same for Safari and Google Chrome browsers. Its license is GPL and works on operating systems similar to Unix, such as Linux.

SeaMonkey is a set of applications for the internet, with a web browser, email client and newsgroups, IRC client, HTML editor, address book and calendar (not always available by default). It is the continuation of the Mozilla suite by a community of users and developers.

Rekonq is a browser based on WebKit and KDE technologies. its goal is to integrate well into the KDE desktop, providing a light experience.

The Google browser won the world for its simplicity and fluidity, and it is thinking in the same way that Yandex intends to be your favorite browser.

Arora is an internet browser that uses Webkit development technology (the same used by Google Chrome and Safari, for example) that has support for several languages, including Portuguese. It is multiplatform, and uses the Qt toolkit.

Netscape has resumed the term “Navigator” and introduced some new features. Its base is now based on Firefox, it has a system very similar to “digg”, where users create their own newspaper, but their own, among other features.