Microsoft is also building the successor to C++

Microsoft: We are creating a new programming language for secure memory. 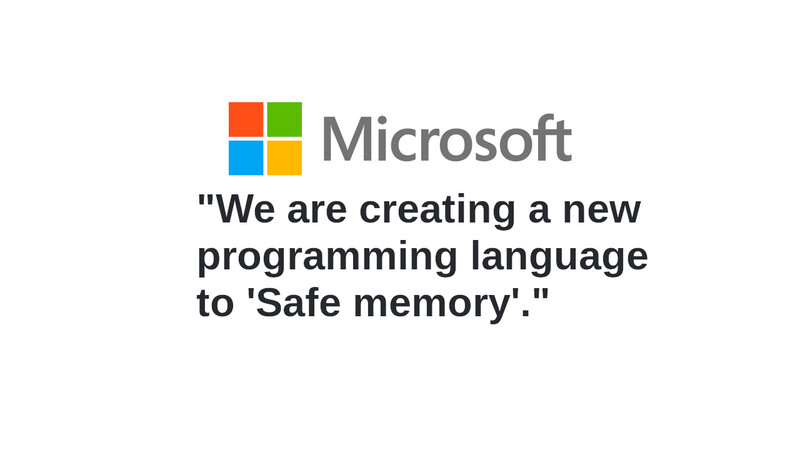 The company recently revealed that its tests with Rust have met their goals, however, the outcome will actually be a programming language of its own. One of the reasons for this is also because Rust has some different features, such as: very large binaries, extensive assembly code and so on.

All Windows users know that on the second Tuesday of each month, Microsoft releases patches to fix security flaws in Windows.

What is Safe Memory ?

When C++ was released, many companies liked the way data was abstracted, especially RAII (constructors and destructors), which was precisely the which differentiated C++ from C that does not have RAII.

With all the success of C++, there were also several criticisms, the most related was the fact that C++ does not have a Garbage Collector (in Portuguese: garbage collection), which is a way to recover regions of memory that were previously allocated , but not returned for the operating system to reuse .

To this day, this safe memory is optional and is used by adding the <memory> library which provides smart pointers .

But, in these modern programming languages, this technique popularized by C++ is not optional but: mandatory, that is, all pointers do not access raw memory, but through a wrapper .

As well as other techniques, such as preventing declaration of a variable that is not used. In C and C++ compilers it is necessary to enable this using the argument: Werror=unused-variable, in addition to others.

But why create a new programming language instead of using C++ features?

This can be answered directly, which would be for reasons of: advertising .

Microsoft’s Project Verona might just turn out to be an experiment that leads nowhere, but the company has progressed far enough to flesh out some of its ideas through the UK-based non-profit Knowledge Transfer Network.

Matthew Parkinson, a Microsoft researcher at Cambridge Computer Lab in the UK who is dedicated to “investigating memory management for managed programming languages”, gave a talk last week focusing on what the company is doing to solve these problems. from memory.

In the keynote, Parkinson discussed the work Microsoft has done with MemGC, which is short for Memory Garbage Collector, for Internet Explorer (IE) and Edge.

“We built a garbage collector (GC) for the DOM. That big bulge in use-after-free was basically people finding ways to explore memory management in the DOM engine in IE”, — said Parkinson, referring to a graph illustrating the prominence of memory security bugs.

The Project Verona also has a syntax similar to the programming language OCaml, as well as Carbon and Rust(mainly him, because his first versions were just written with OCaml, then changed to Bootstrapping) which is the tendency for syntax, different from languages such as: Java, PHP, JavaScript, C++ and among others that inherited the C style syntax .

However, the Verona Project will still maintain C++ style abstractions such as use of: classes, polymorphism and inheritance. And so far the Verona programming language is being written in C++.

Below is an example of a basic Hello, World! written with the Verona programming language:

How to test Project Verona on your machine?

Verona also uses LLVM which serves to generate the final assembly code, in addition to optimizing and standardizing resources. But you can clone with Git in a rescursive way and then compile, example:

This is the procedure in general lines, but there are already details for compilation both in Windows for Visual Studio and also for Ubuntu. See here all required dependencies and more.

Carbon, Google’s new programming language, intends to be the successor of C++ .