A definitive list for Linux, macOS and Windows and one that is also suitable for other programming languages! 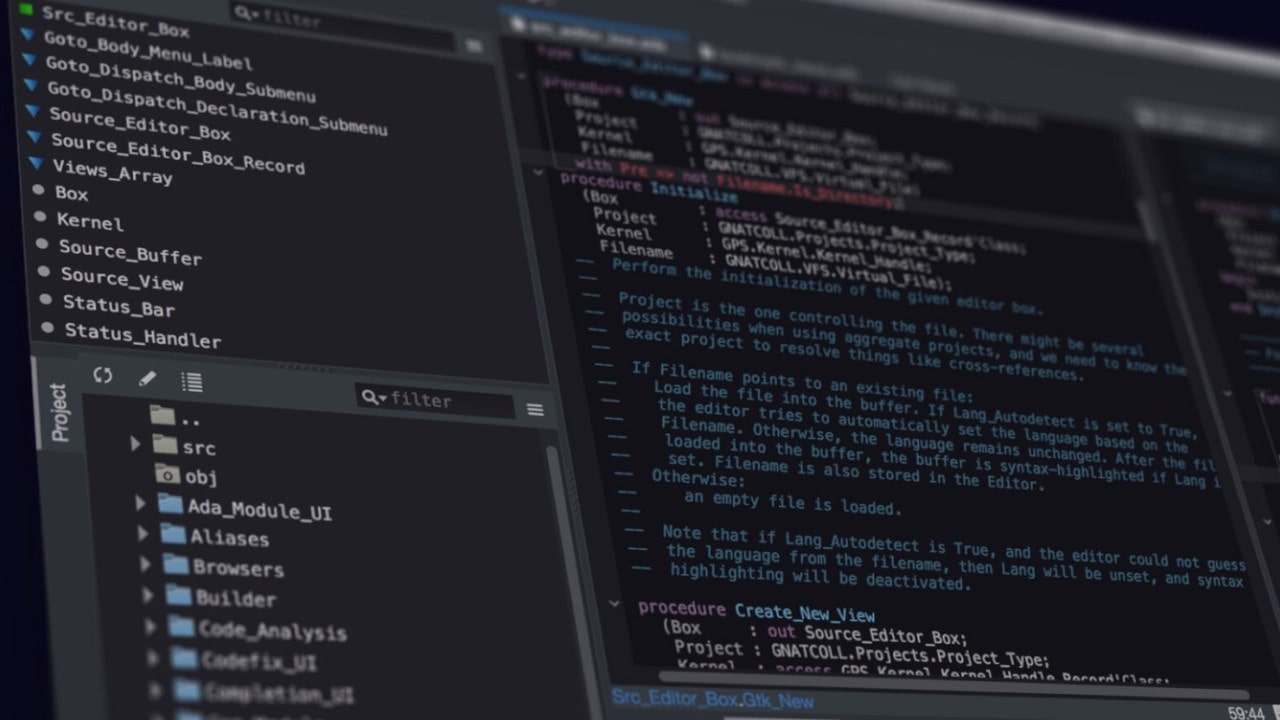 Not everyone has the same tastes and when it comes to development C++ the form and environment can vary from person to person.

Many are not satisfied with the development environment they use or plan to test others to see if things run better.

Based on that I decided to build the biggest list of Text Editors and IDEs for C++ where many of these alternatives will also work for other programming languages, mainly for Linguagem C.

So let’s go to the list because it’s nothing small! 😃 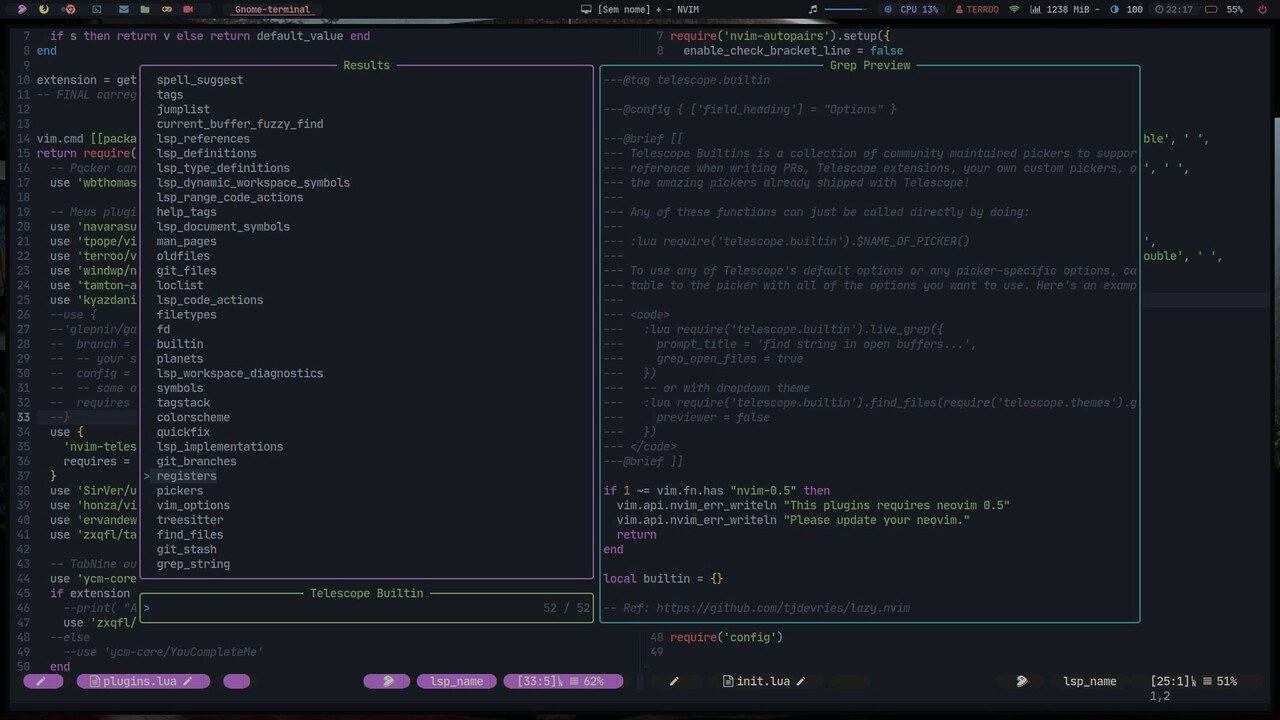 Neovim is a fork of Vim with the objective of improving the code base, allowing easier API implementation, better user experience and plug-in implementation.

In addition to C and C++ it is also suitable for any other programming language.

We have a complete series about Neovim which includes: Installation, Customization, Installation of plugins and more and you can start it from this link . 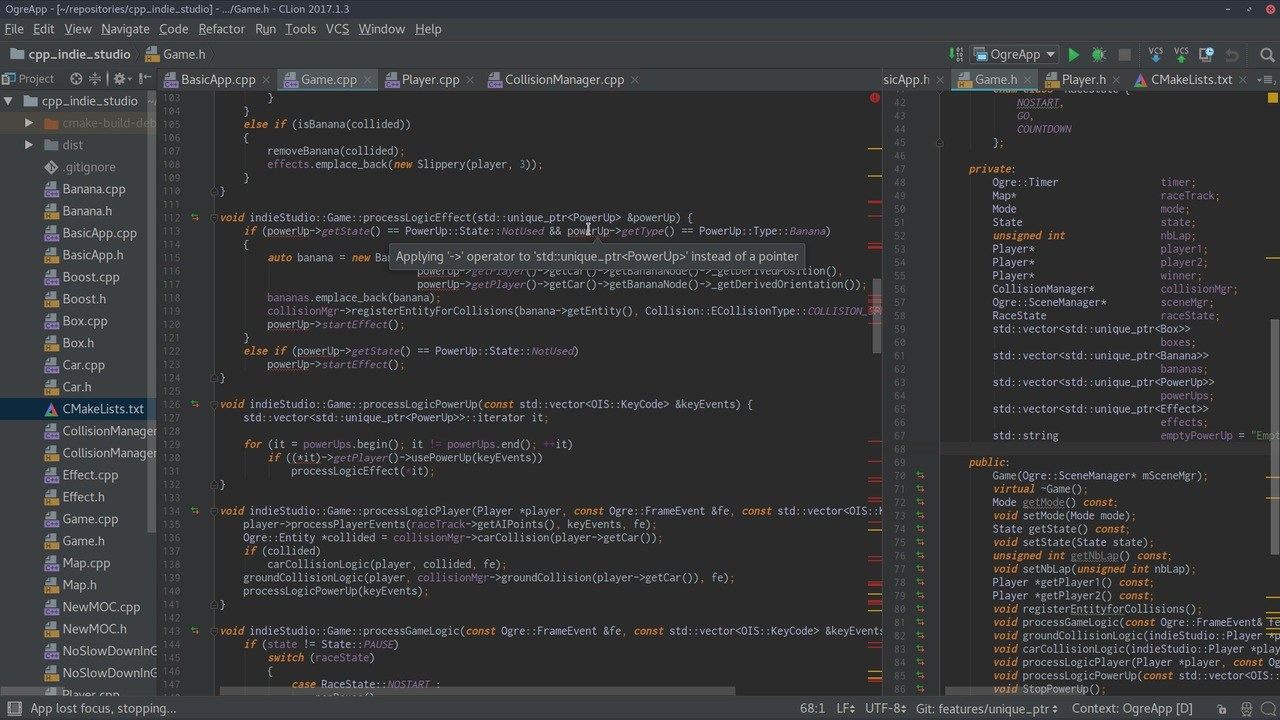 CLion, from the Czechoslovakia company JetBrains, formerly IntelliJ Software, is an IDE C and C++ for Linux, macOS and Windows integrated with the compilation system CMake .

It supports GNU Compiler Collection (GCC) and Clang and debugger GDB , LLDB and Google Test . In addition to C and C++, CLion supports other languages directly or through plug-ins: Kotlin, Python, Rust, Swift and others. 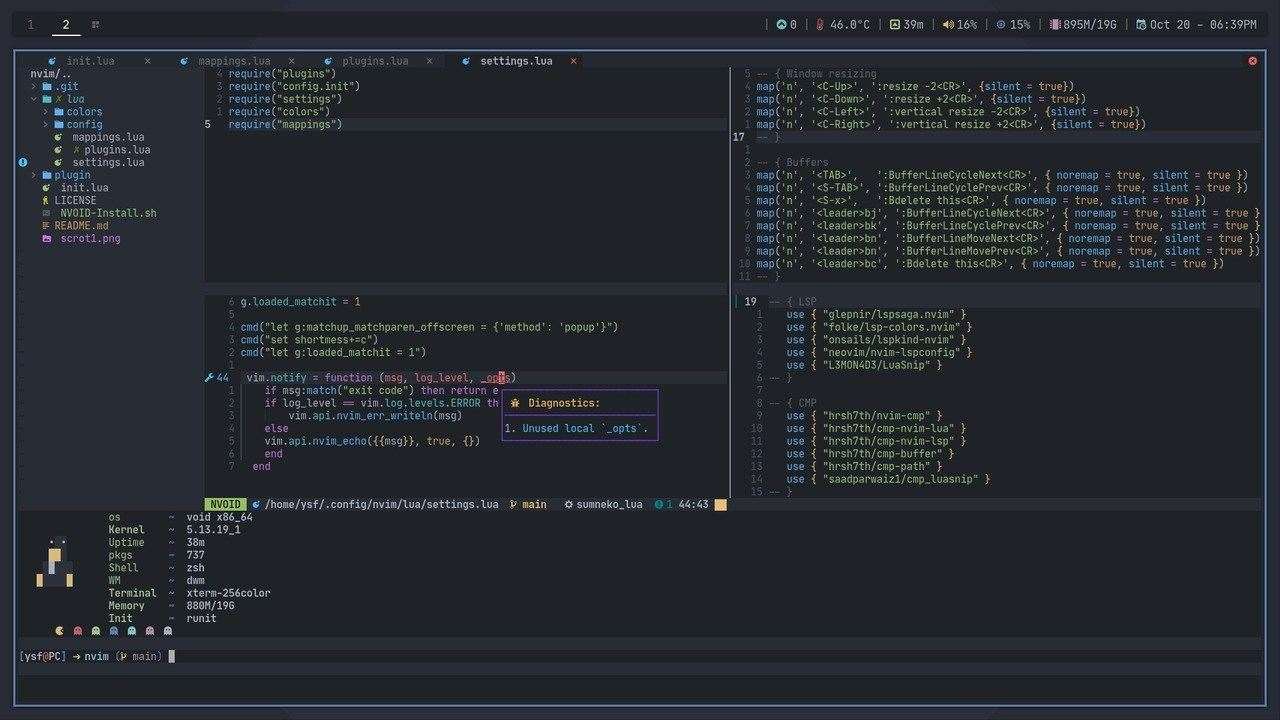 Vim (a contraction of Vi IMproved, in Portuguese Vi Improved) is a clone of the text editor program vi to Unix by Bill Joy.

It was written by Bram Moolenaar based on the source for a port of Stevie editor to Amiga . Vim is intended for use from either a command line interface or a standalone application in a graphical user interface.

It is Free Software and open source and is released under a license that includes some charitable clauses, encouraging users who join the software to consider donating to Ugandan children. The license is compatible with the GNU General Public License through a special clause allowing the distribution of modified copies “under the GNU GPL version 2 or any later version “. 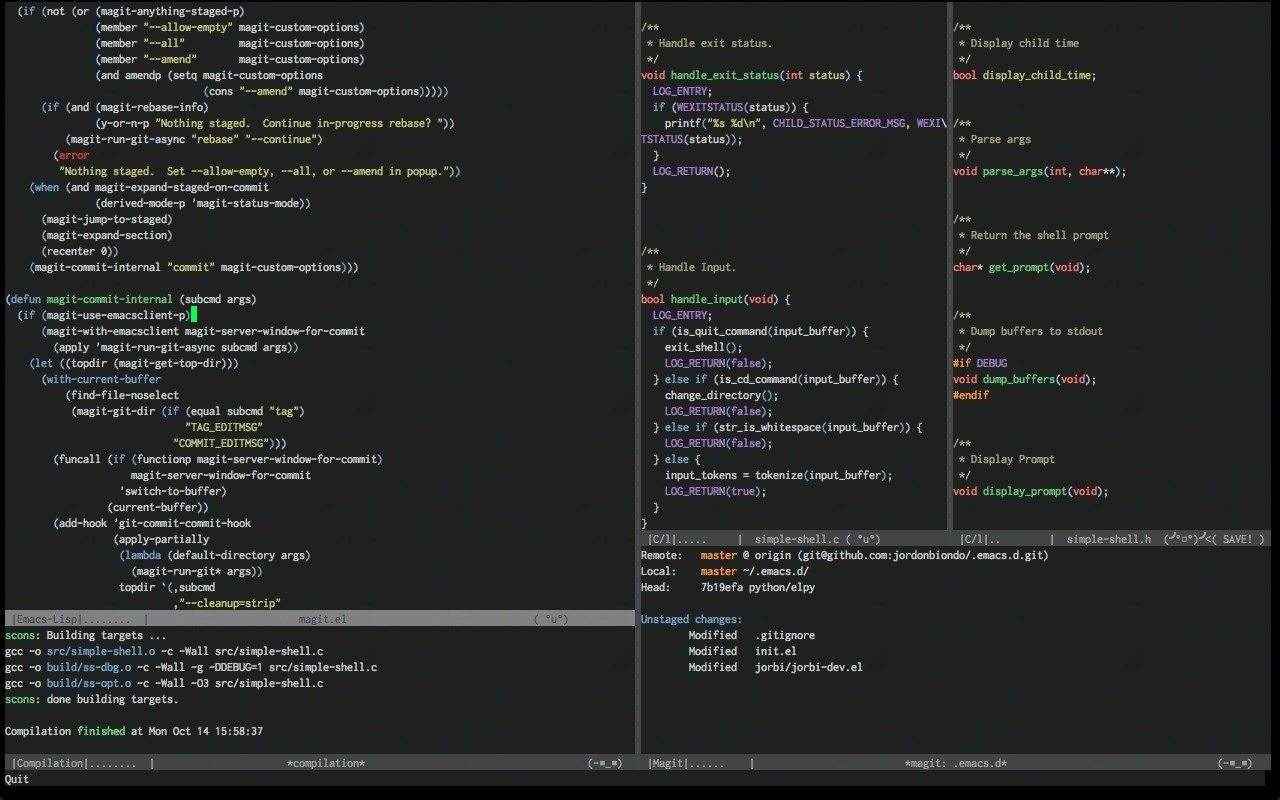 Emacs is a family of text editors that are characterized by their extensibility. The manual for the most widely used variant, GNU Emacs , describes it as “the extensible, customizable, self-documenting real-time display editor”. Development of the first Emacs began in the mid-1970s, and work on its direct descendant, GNU Emacs, actively continues into 2021 .

Emacs has more than 10,000 commands built in and its user interface allows the user to combine these commands into macros to automate the work.

Emacs implementations usually have a dialect of the Lisp programming language. Extensions have been written to manage email, files, outlines, and RSS feeds, as well as clones of ELIZA, Pong, Conway’s Life, Snake and Tetris.

Emacs is considered by many to be an operating system (contains irony). The most popular and most ported version of Emacs is GNU Emacs, which was created by Richard Stallman for the GNU Project.

Spacemacs is a configuration framework for GNU Emacs . It can take advantage of all the features of GNU Emacs, including graphical and command-line user interfaces, and run on the X Window System and a terminal shell of Unix . It is free and open source software (FOSS) released under the GPL-3.0 or later license. 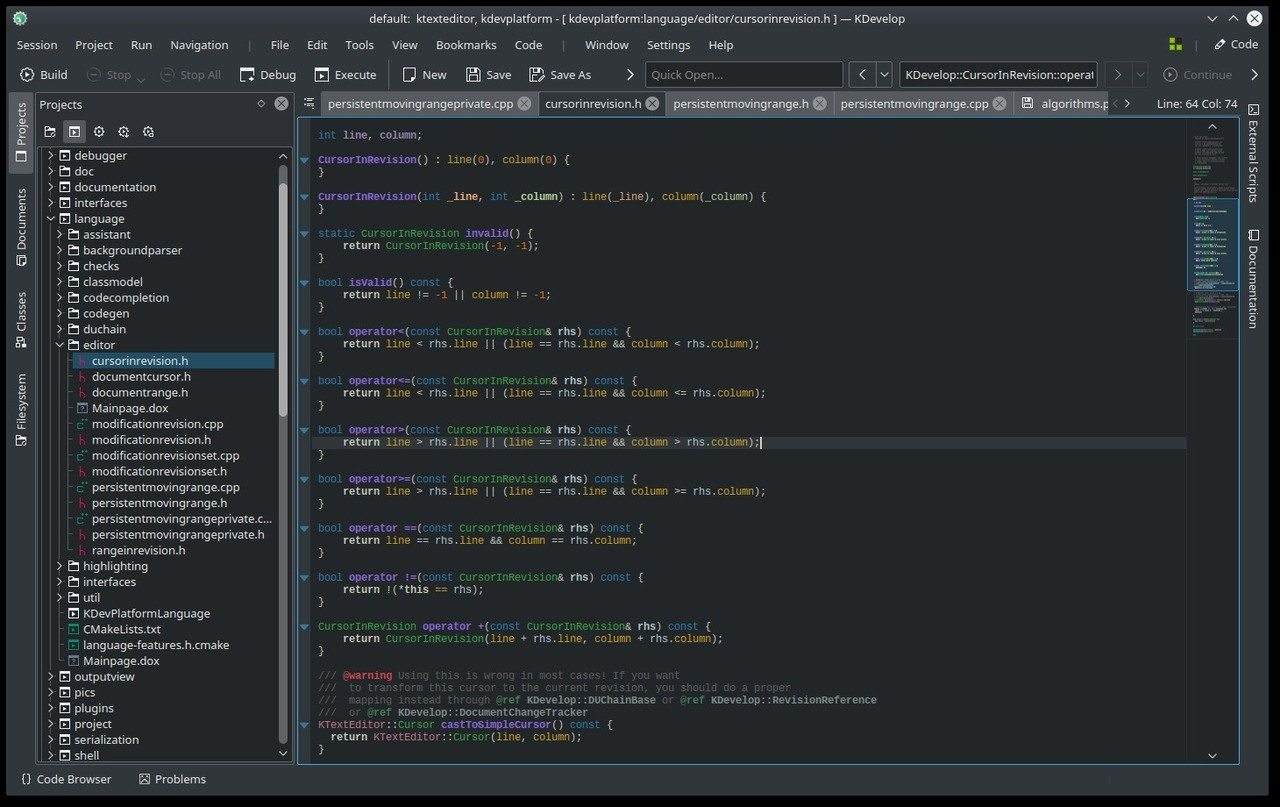 KDevelop 5 has parser backends for C , C++ , Objective-C , OpenCL and JavaScript/QML , with plugins that support PHP , Python 3 and Ruby . Basic syntax highlighting and code folding are available for dozens of other source code and markup formats, but without semantic analysis.

KDevelop is part of the KDE project and is based on KDE Frameworks and Qt . The C/C ++ backend uses Clang to provide accurate information, even for very complex code bases.

You can install the AppImage and use KDevelop as follows: 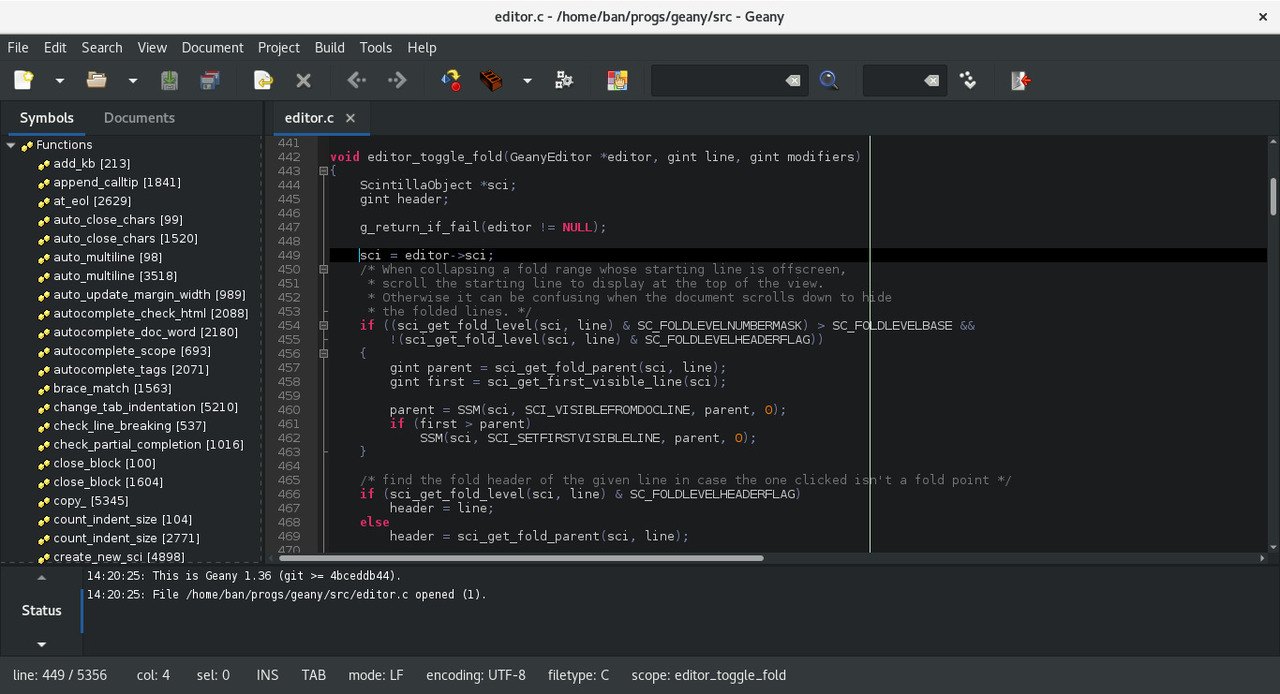 Geany is a cross-platform text editor developed in GTK+ that has basic functions for an integrated development environment (IDE), licensed under the GNU GPL version 2.

It was developed with the intention of providing a light, fast IDE with few dependencies. Geany is available for several operating systems, such as BSD, Linux, macOS, Solaris and Windows .

In fact, it can run on any platform that supports the GTK libraries ), as it requires only the GTK2 runtime libraries. 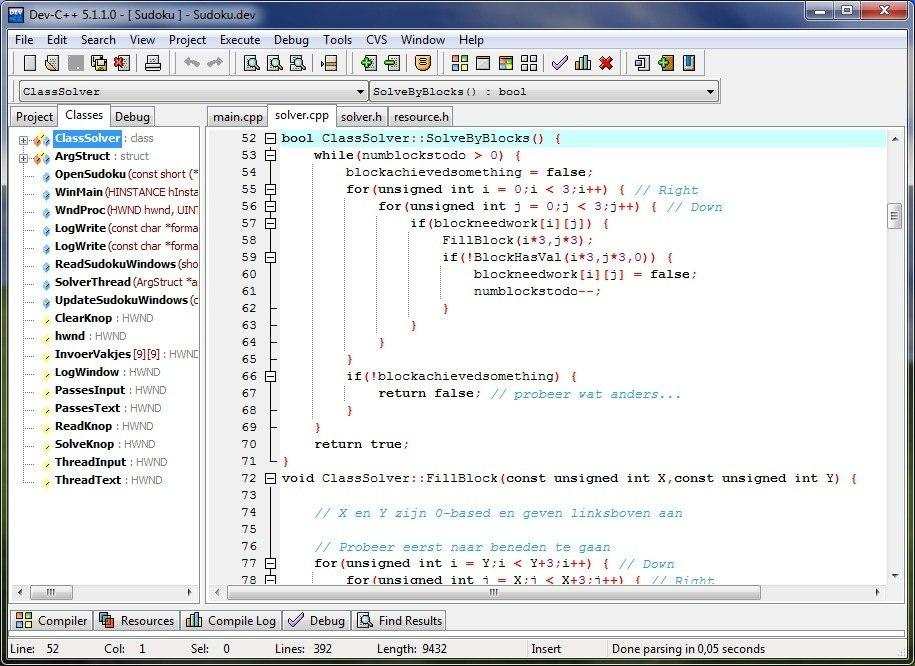 Dev-C++ (also known as Dev-Cpp) is a free integrated development environment that uses the GNU project’s compilers to compile programs for the Microsoft Windows operating system. It supports C and C++ programming languages, and has the entire ANSI C library. The IDE is written in Delphi. 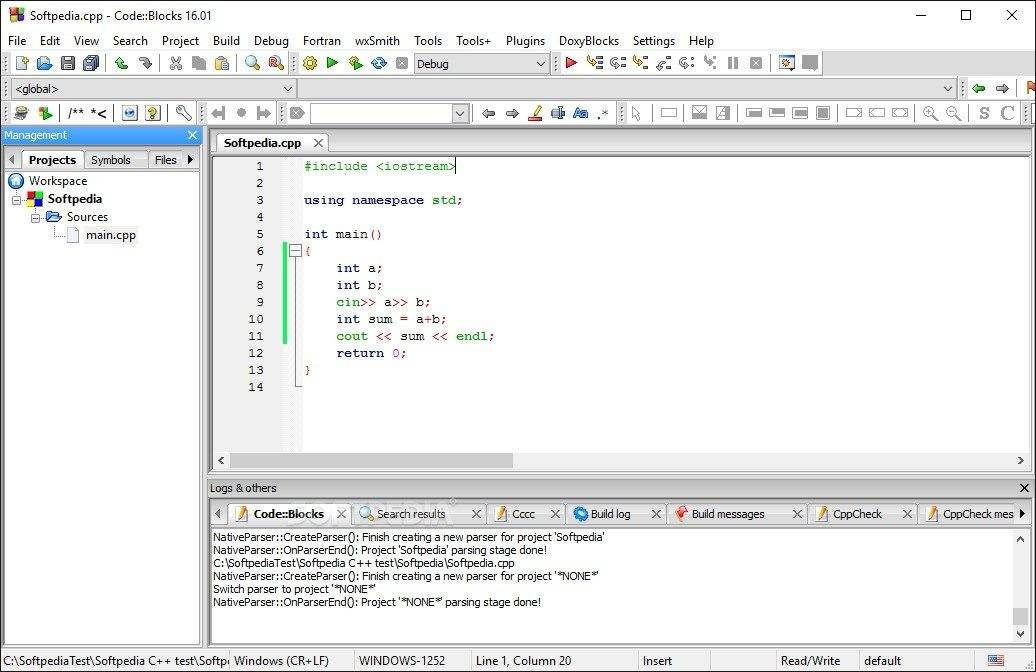 Code::Blocks is an open-source, cross-platform integrated development environment. It was developed in C++, using wxWidgets. Its architecture is plugin-oriented, so its functionality is defined by the plugins provided to it.

Code::Blocks is designed for C/C++ and Fortran development, and can also be used to create ARM, AVR, D (programming language), DirectX, FLTK, GLFW, GLUT, GTK+, Irrlicht, Lightfeather, MATLAB, OGRE, OpenGL, Qt, SDL, SFML, STL, SmartWin and programs or applications with wx, although in certain cases the installation of SDKs or frameworks is necessary.

Code::Blocks is being developed for Windows and Linux. Some users have also successfully compiled Code::Blocks for FreeBSD and macOS . 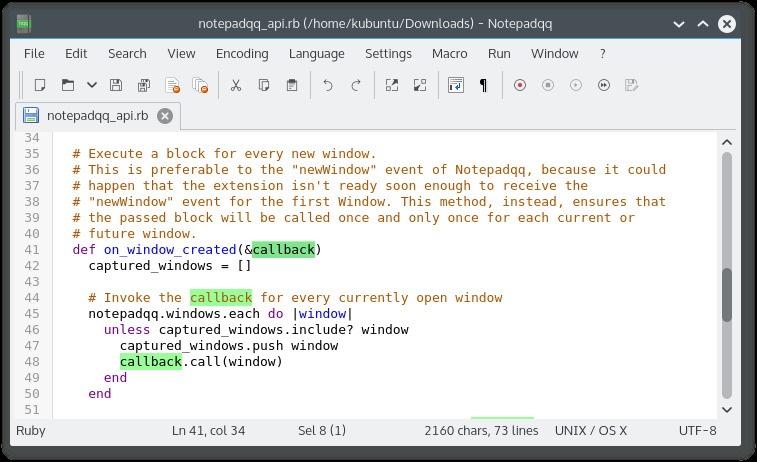 Notepadqq is an editor similar to Notepad++ for Linux.

It helps developers by providing everything you can expect from a general purpose text editor like syntax highlighting for over 100 different languages, folding code folding, color schemes, file tracking, multiple selection and much more.

You can search text using the power of regular expressions. You can organize documents side by side. You can use real-time highlighting to quickly find nearby tags. 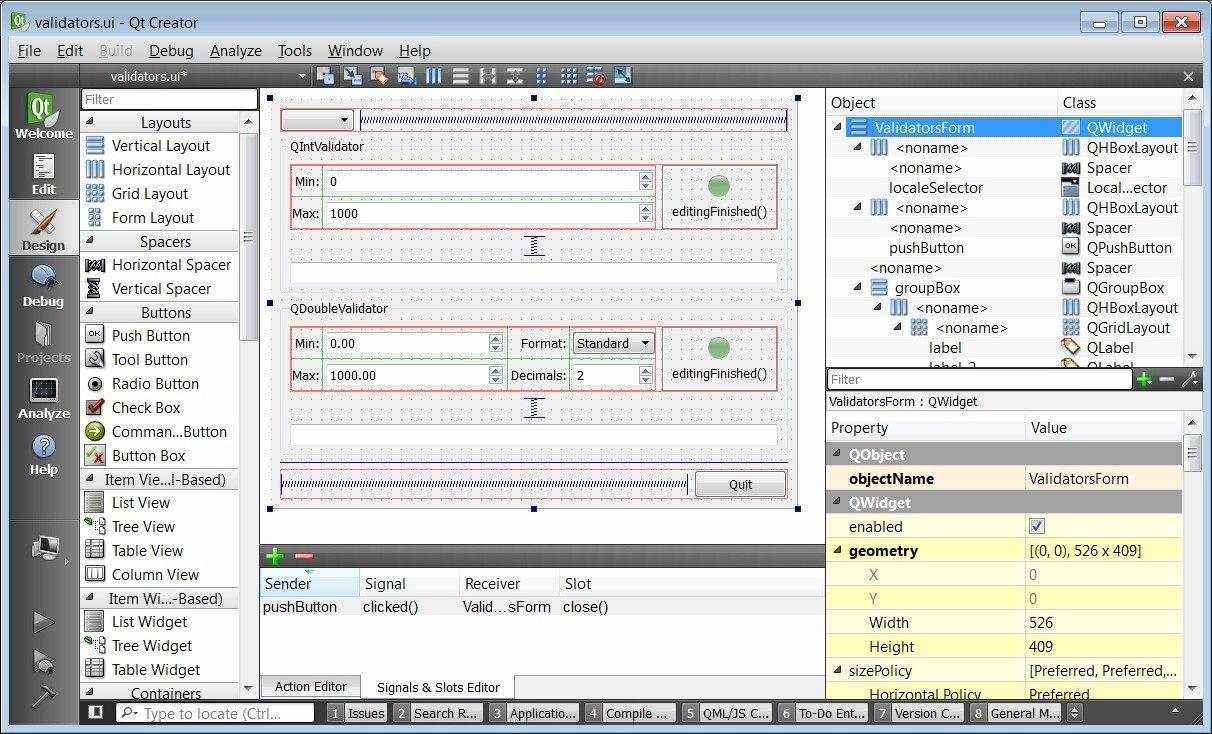 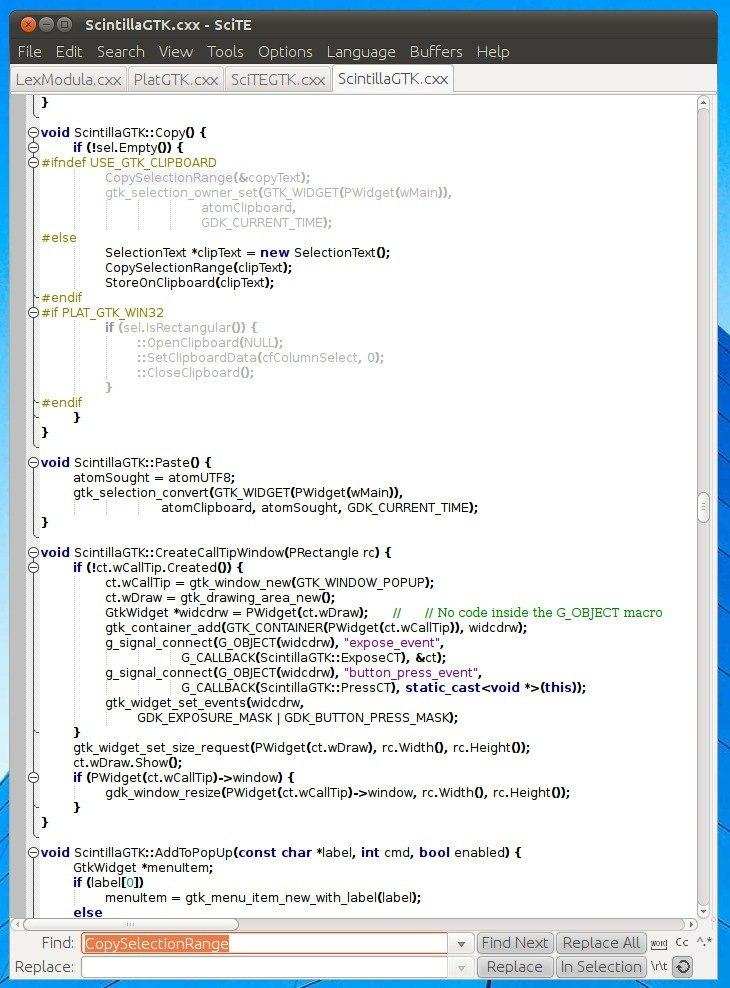 SciTE or SCIntilla is a cross-platform text editor written by Neil Hodgson using the Scintilla editing component . It is licensed under a minimal version of the Historic Permission Disclaimer.

It’s lightweight and built to be fast, it’s primarily designed for source code editing, and it performs syntax highlighting and built-in function reference for many different languages.

There is a standalone .exe available for Microsoft Windows, intended for USB flash drives . SciTE shares some features with other editors based on the Scintilla editing component. 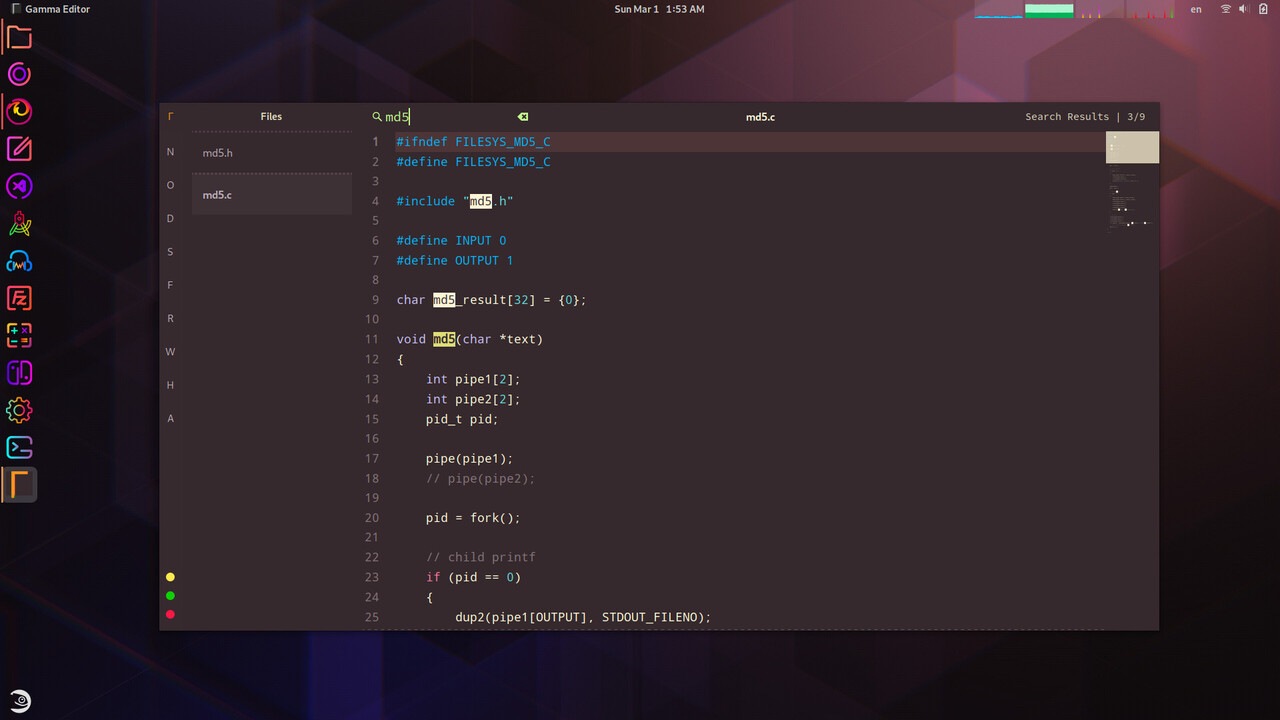 Gamma (Γ) is a lightweight text editor. It is intended to be an alternative to Gedit or Notepad++.

Although the current implementation is tested on Linux with desktop environment GNOME, it it can also be run on Linux, Windows and Mac if the dependencies are installed (see the Dependencies section below).

We have a full article on Gamma, go for more installation details: Meet the new Gamma text editor. 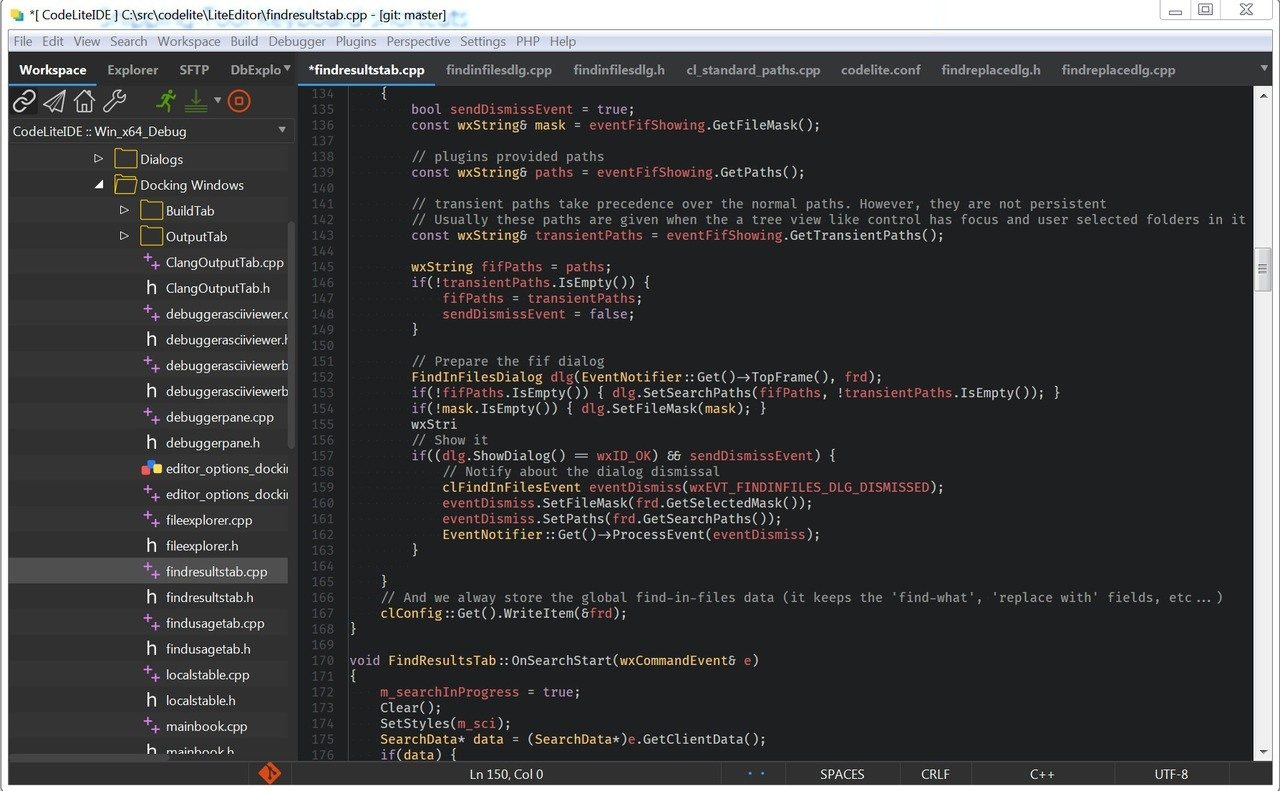 CodeLite is a free, open-source, cross-platform IDE for the programming language C/C++ , but can also be used for PHP, and JavaScript (Node.js).

GNAT Studio is a free multi-language integrated development environment (IDE). GNAT Studio uses compilers from the GNU Compiler Collection , whose name comes from GNAT , the GNU compiler for the Ada programming language, but also for other languages ​​like C/C++ . 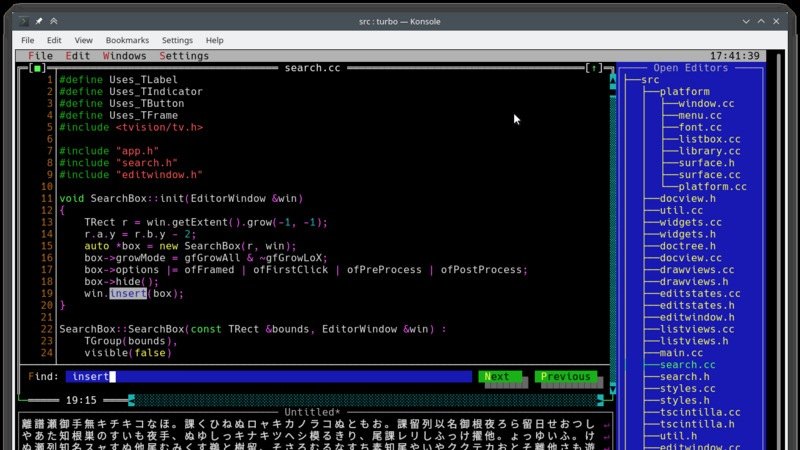 Turbo is an experimental text editor for the terminal, based on Neil Hodgson’s Scintilla code editing component and the Turbo Vision application framework and uses the NCURSES library.

It was created to demonstrate the new features of Turbo Vision. In particular, it served as a testing ground for Turbo Vision’s Unicode features.

As a text editor, Turbo is intended to be intuitive and easy to use. Usability and productivity are its other two big goals, although it hasn’t gotten that far yet. And just because it’s a Turbo Vision app, it offers a vintage look.

We have a full article on Turbo: Install the Turbo editor for C/C++ and kill Turbo Vision 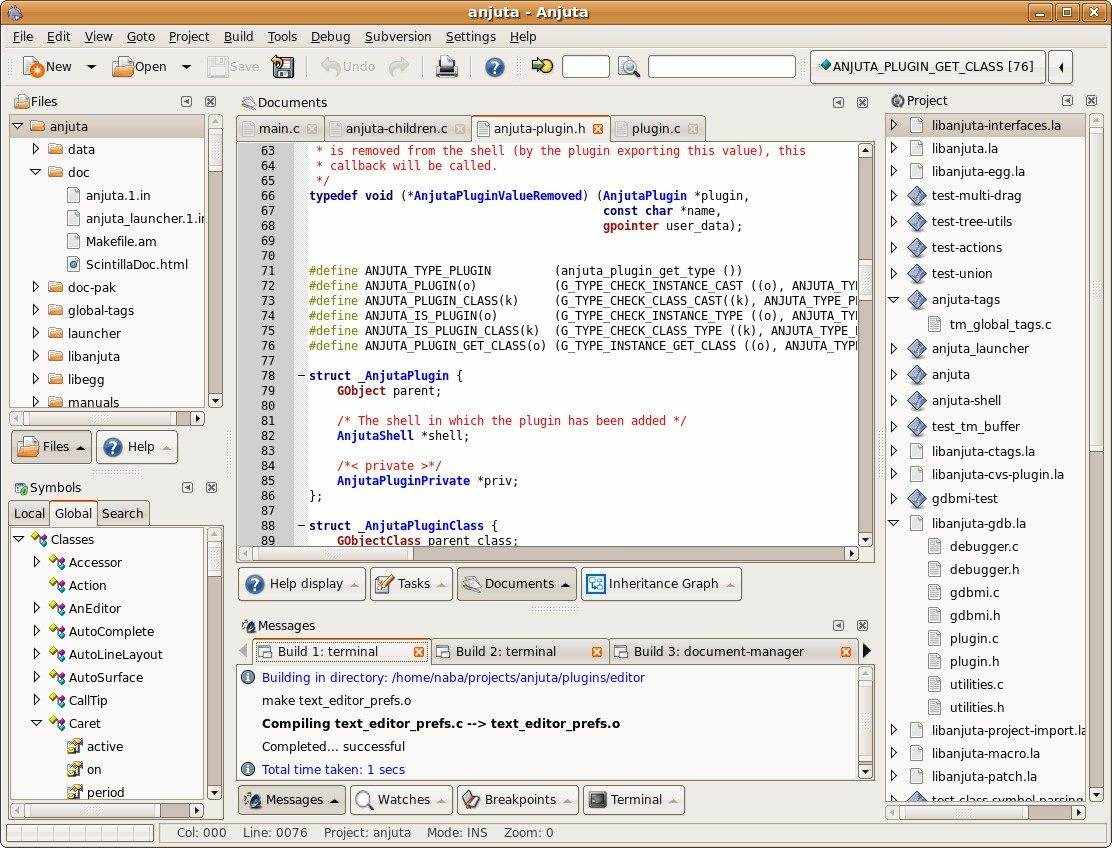 Anjuta is an Integrated Development Environment for C and C++ on GNU/Linux. It was written for GTK+/GNOME and supports many advanced capabilities like project management and a powerful source code editor. Anjuta is free software distributed under the GPL license. 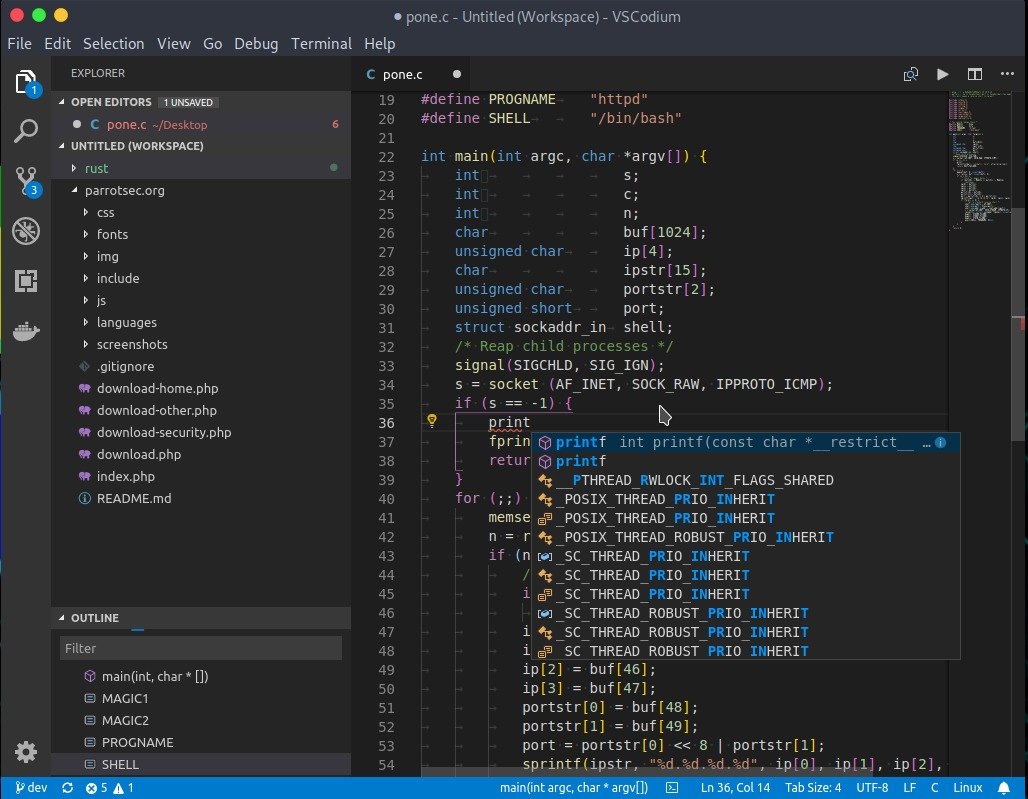 VSCodium is an editor identical to Microsoft’s Visual Studio Code but the only differences is that the icon is different and best of all, it has no trackers and no telemetry to measure and know what you develop.

It is available for Windows, macOS and Linux. It comes with built-in support for JavaScript, TypeScript and Node.js and has a rich ecosystem of extensions for other languages ​​(such as C++, C#, Java, Python, PHP, Go) and times. execution (such as .NET and Unity). 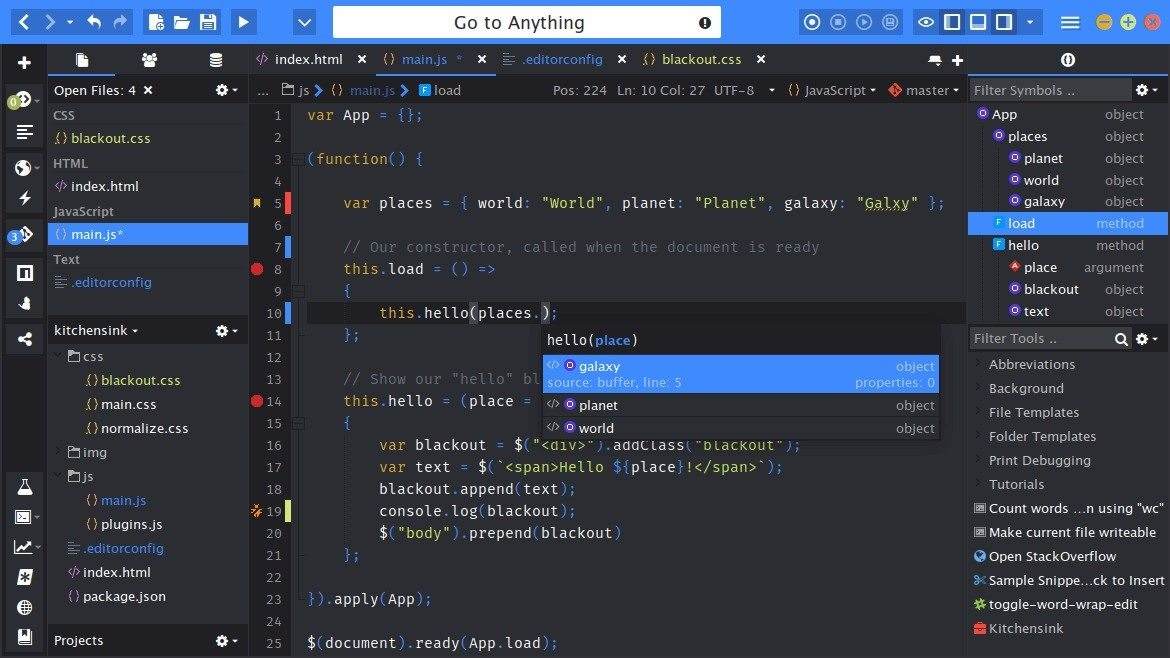 Komodo IDE is an integrated development environment (IDE) for dynamic programming languages. It was created in May 2000. Many of Komodo’s features came from a built-in Python interpreter. 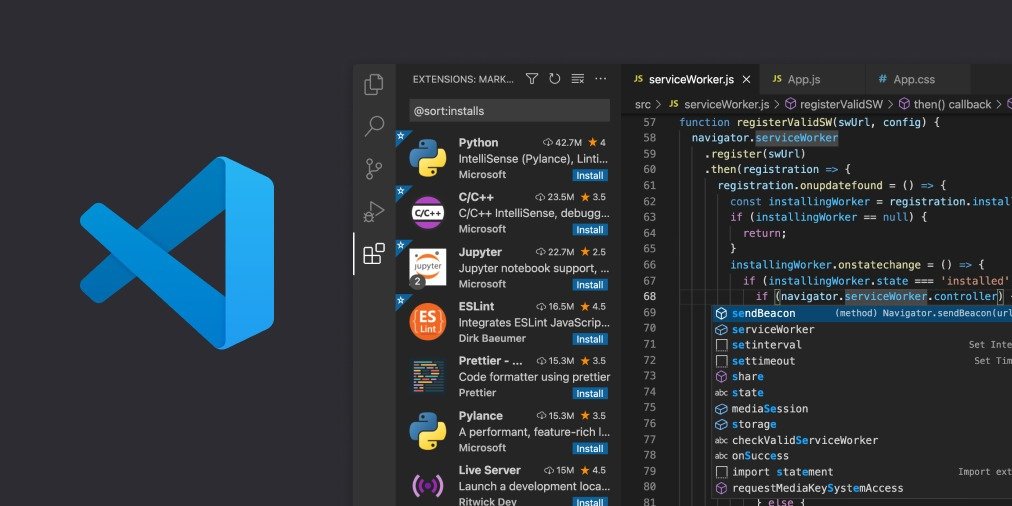 This one needs no information most know it well, as it is the flagship Microsoft text editor/IDE. We have another article about it:

VS Code now also has an online version that can be accessed at: https://vscode.dev/. 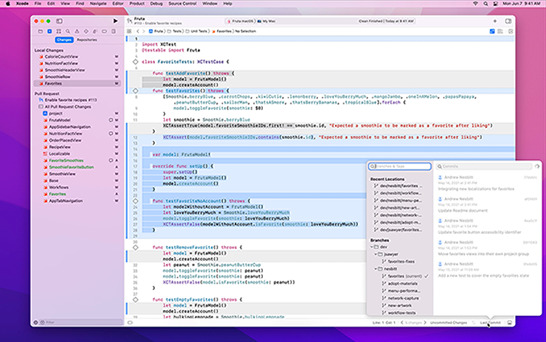 Xcode is Apple’s integrated development environment (IDE) for macOS. Or that is, it only works on macOS. 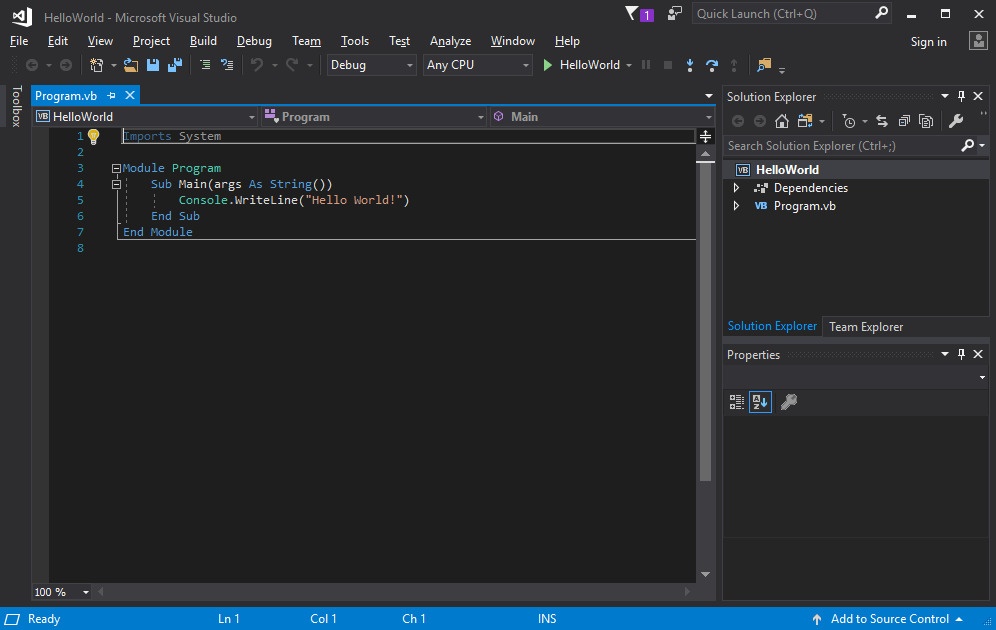 Gedit is a GNOME text editor. Similar to Windows Notepad, but with developer features like: 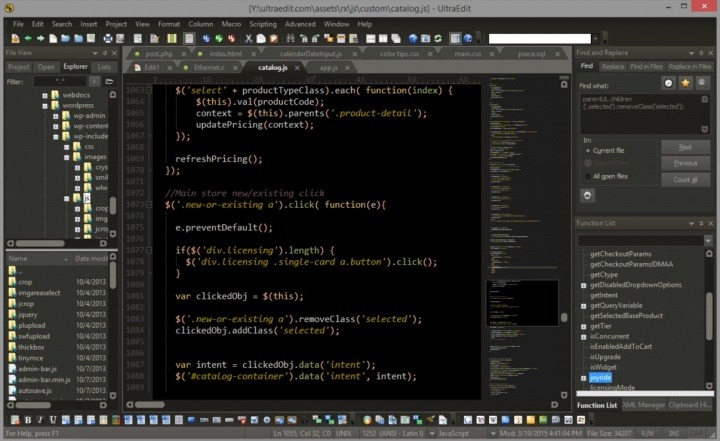 UltraEdit is a commercial text editor for Microsoft Windows and Linux operating systems. 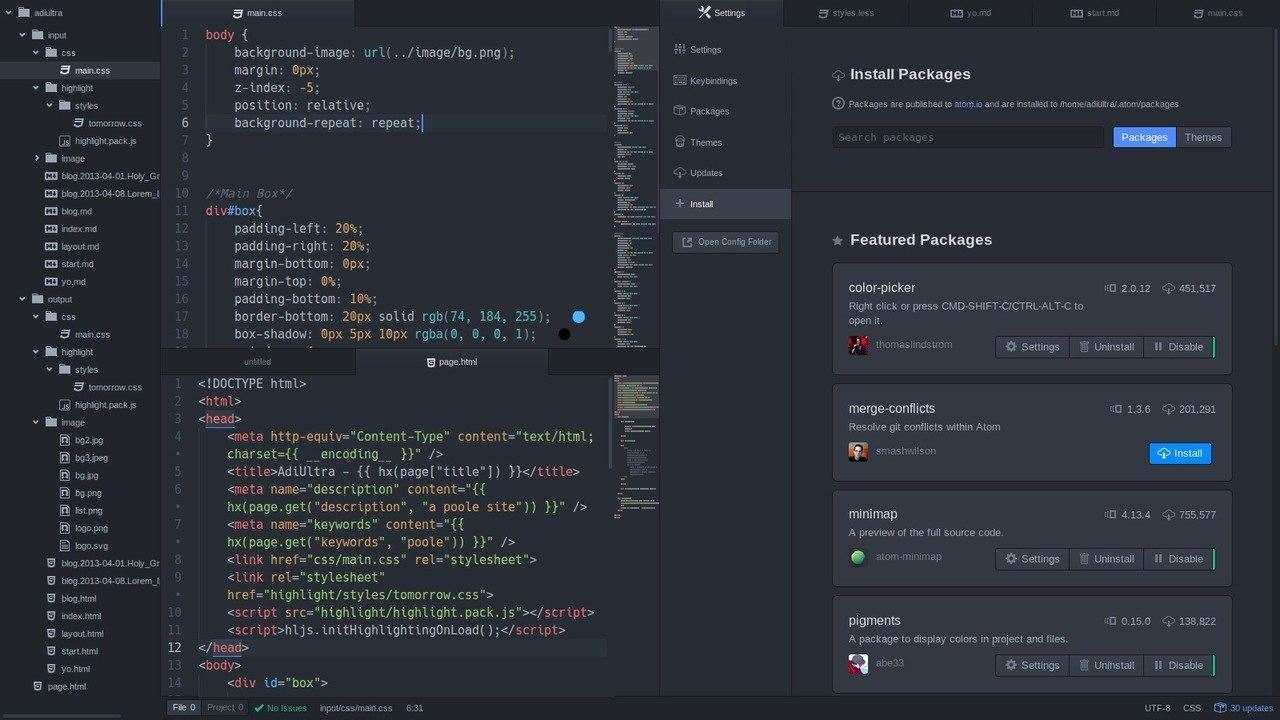 Atom is an open source text editor available for Linux, macOS and Microsoft Windows platforms, developed by GitHub under the MIT license. 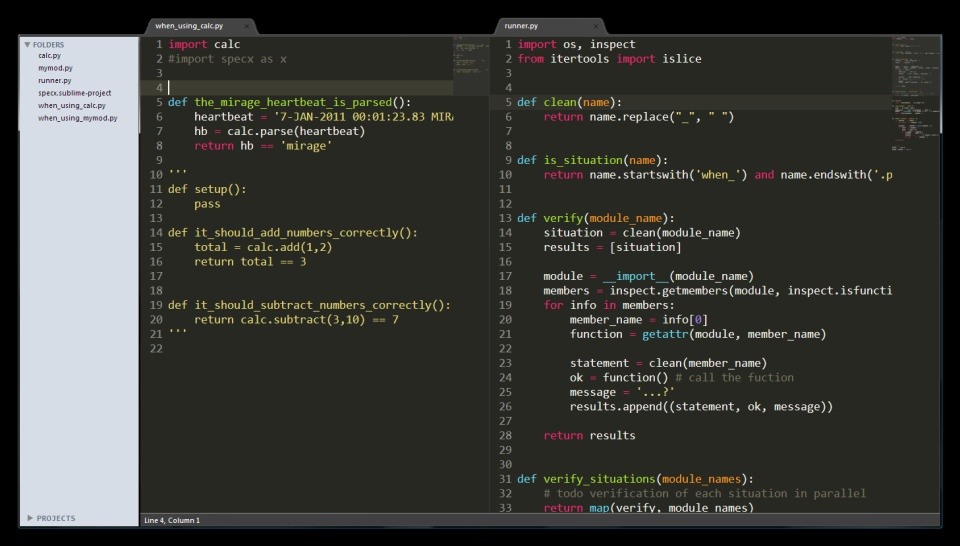 Sublime Text is a cross-platform source code editor and shareware . It natively supports many programming languages ​​and markup languages.

Brackets is a source code editor with a main focus on web development. Created by Adobe Systems , it is free and open source software licensed under the MIT license and is currently maintained on GitHub by open source developers.

You can install Brackets AppImage via app-get, a command-line package manager that serves to install AppImages, click here to learn more. 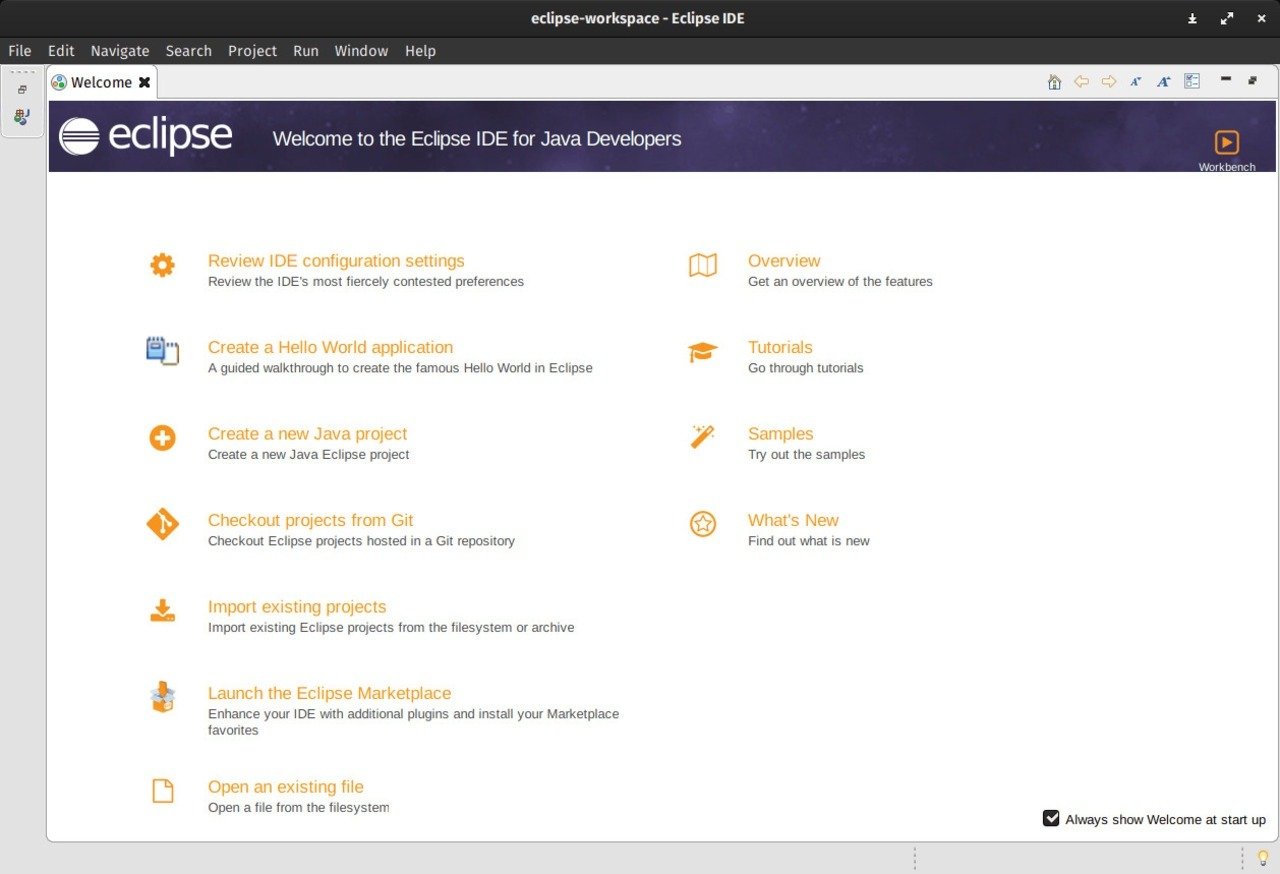 Eclipse is an IDE for Java development, but it supports several other languages ​​from plugins like C/C++, PHP, ColdFusion, Python, Scala and Kotlin. It was made in Java and follows the open source software development model. 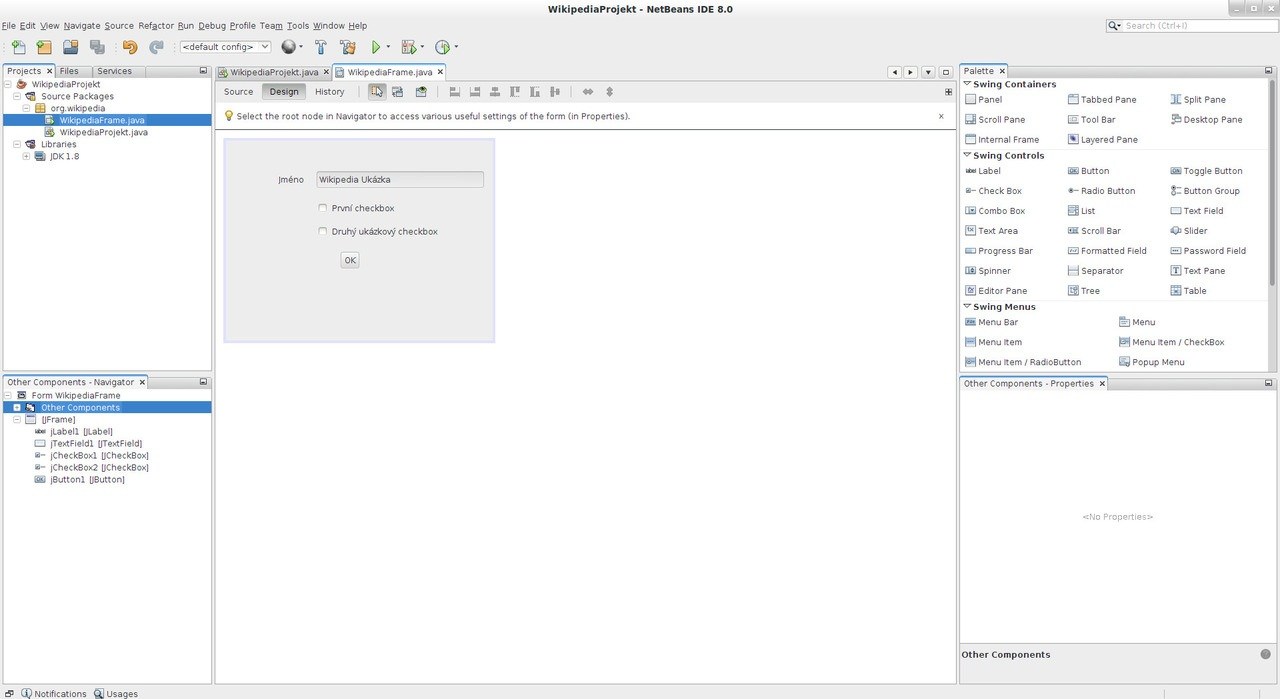 NetBeans is an integrated development environment (IDE) for Java. NetBeans allows applications to be built from a set of modular software components called modules. NetBeans runs on Windows, macOS, Linux and Solaris. In addition to Java development, it has extensions for other languages ​​such as PHP , C , C ++ , HTML5 and JavaScript . 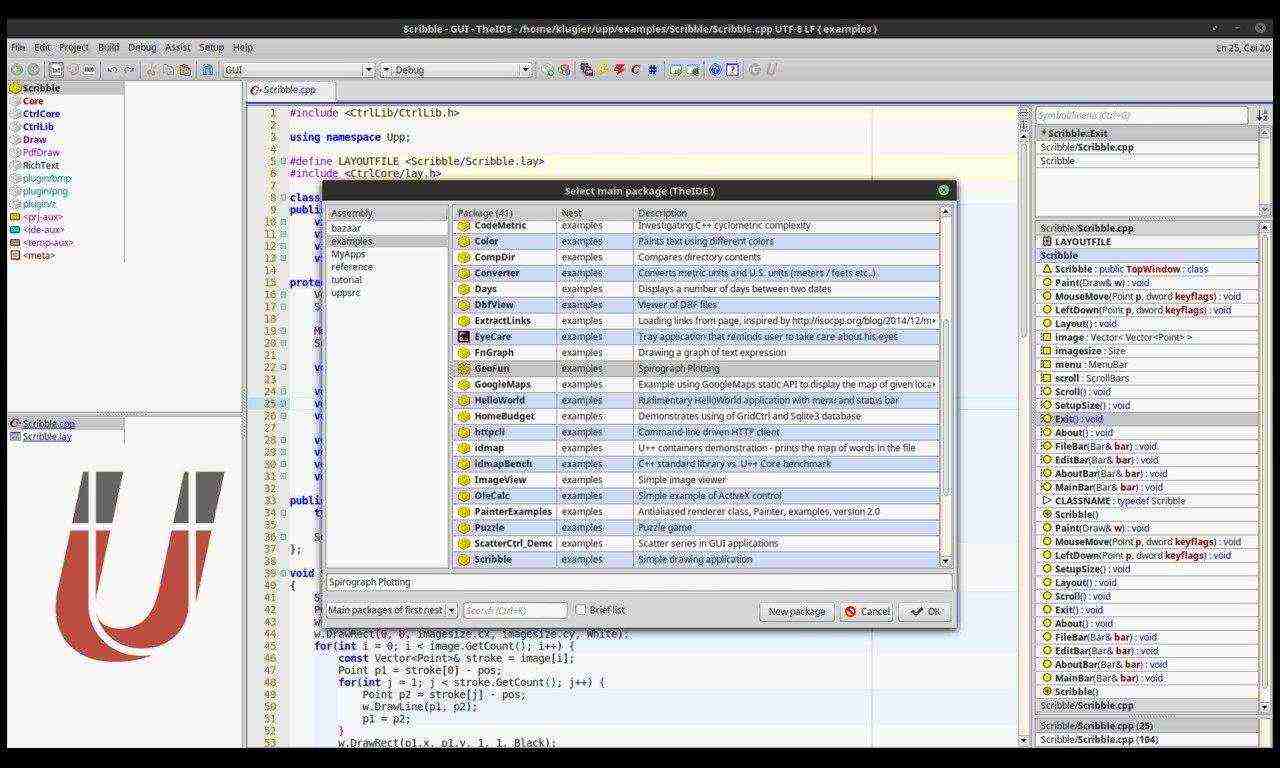 Ultimate++ or U++ is a cross-platform C++ development application focused on programmers’ productivity and uses the U++ integrated development environment, TheIDE, to introduce modular concepts for C++ programming. 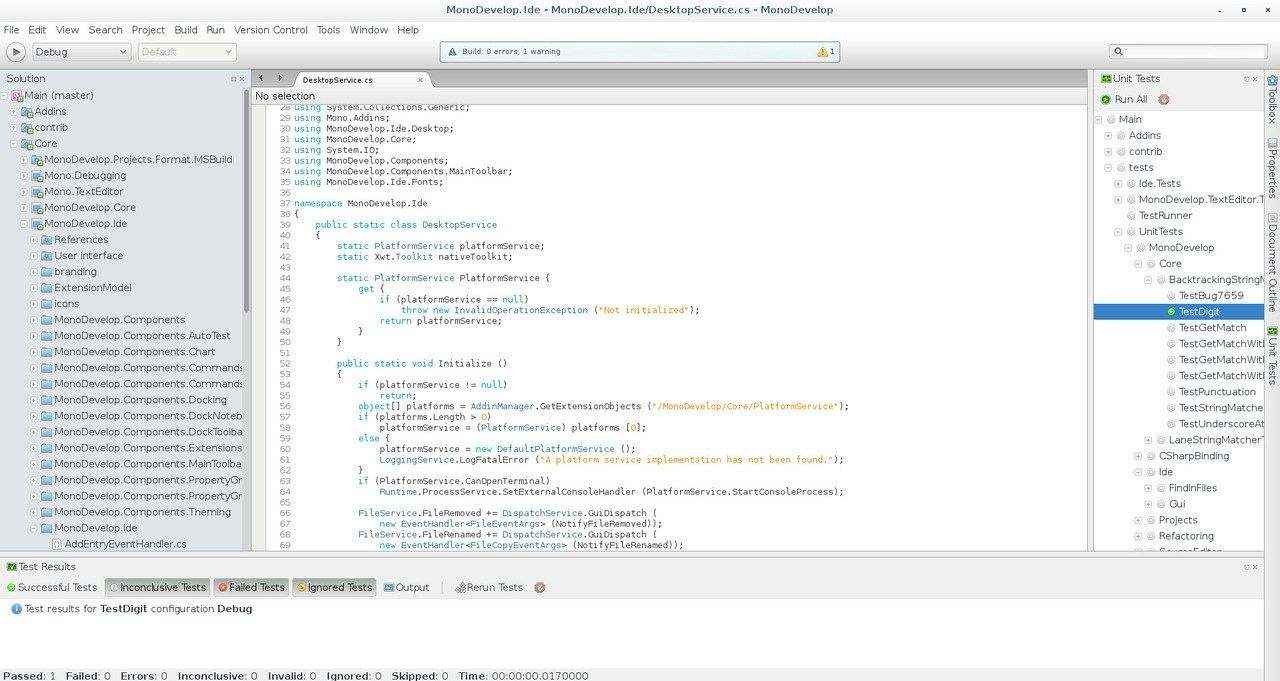 And to finish this list, let’s go to MonoDevelop, also known as Xamarin Studio, it’s an open-source integrated development environment for Linux , macOS and Windows .