Examples of functions: fread(), fwrite(), remove() and others in C 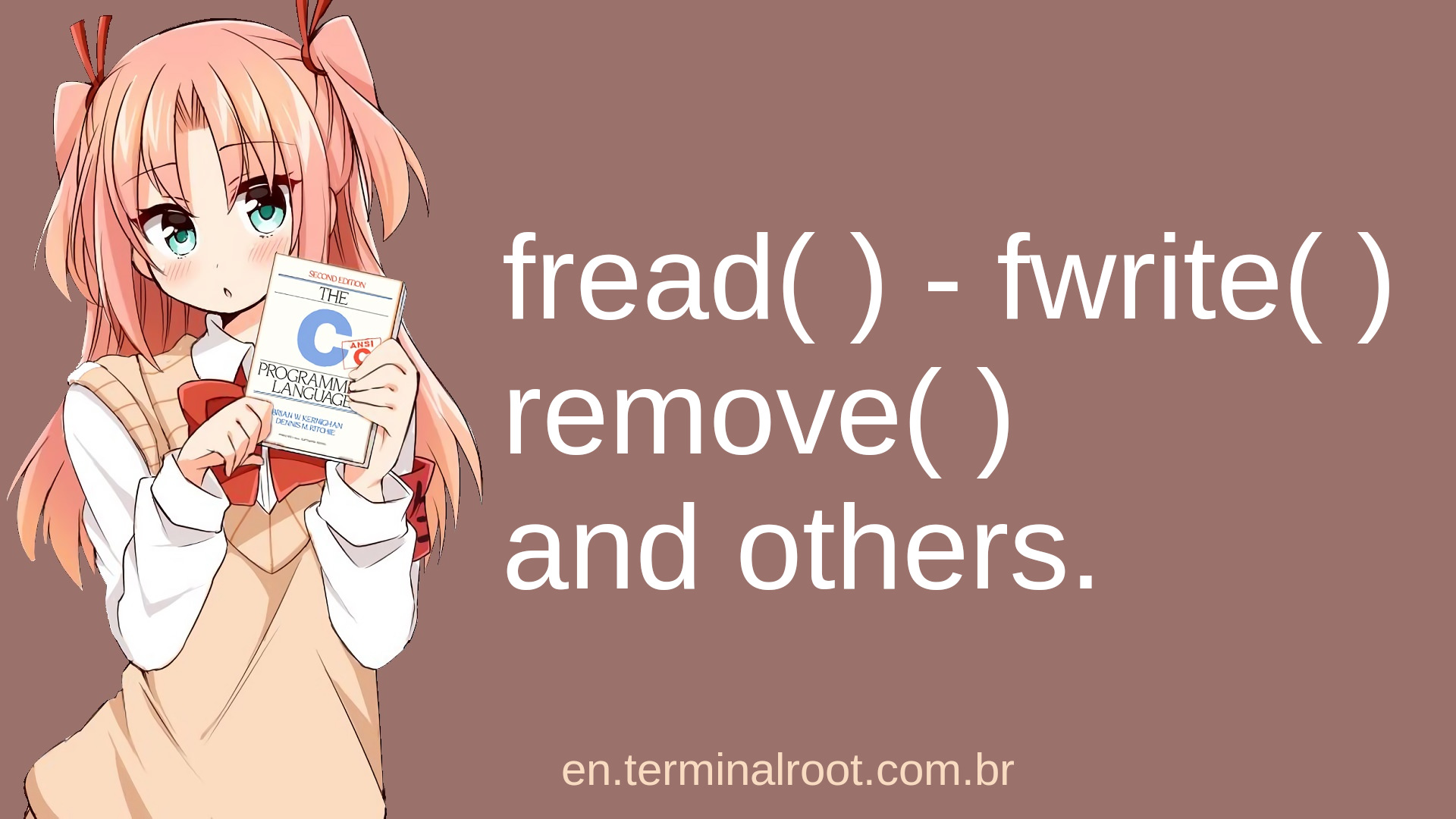 We can write and read blocks of data. For that, we have the functions fread() and fwrite(). The fread() prototype is:

The buffer is the memory region where the read data will be stored. The number of bytes is the size of the drive to be read. count indicates how many units to read. This means that the total number of bytes read is:

The function returns the number of units actually read. This number may be less than count when the end of file is encountered or an error occurs. When the file is opened for binary data, fread can read any data type.

There must be a file in the directory before you will run the program, for example: echo "This content will be read" >> the_file.txt

The fwrite() function works like your companion fread(), but writing to the file. Your prototype is:

The function returns the number of items written. This value will be equal to count unless an error occurs.

Standard file streams allow the programmer to read and write files in the standard way we read and wrote them on screen.

A warning may appear on your compiler, but it will work!

The C function library int fputs (const char * str, FILE * stream) writes a string to the specified stream up to, but not including, the null character.

Following is the statement for the fputs() function:

Writes a string to a file. This function returns a non-negative value plus, in case of error returns EOF.

Then run at the terminal (even if you didn’t create the file before): cat my_file.txt and look at the content created with your C code! =)

To read a string in a file we can use fgets() whose prototype is:

The function takes 3 arguments: the string to read, the upper limit of characters to read, and the pointer to FILE, which is associated with the file from which the string will be read. The function reads the string until a newline character. either read or length-1 characters have been read. If the newline character (‘\n’) is read, it will be part of the string, which was not the case with gets. The resulting string will always end with ‘\0’ (so only 1 character length maximum will be read). The fgets function is similar to the gets() function, but in addition to being able to read from a data file and including the newline character in the string, it still specifies the maximum length of the input string. As we have seen, the gets function did not have this control, which could lead to “buffer overflow” errors. Therefore, given that the fp pointer can be replaced by stdin, as we saw above, an alternative to using gets is to use the following construct:

where str is the string being read and size must be equal to the size allocated for the string subtracted from 1, because of the \0.

int ferror (FILE *fp); . The function returns zero if no errors occurred and a nonzero number if any errors occurred while accessing the file. ferror() becomes very useful when we want to verify that each access to a file has been successful so that we can ensure the integrity of our data. In most cases, if a file can be opened, it can be read or written. However, there are situations where this does not occur. For example, you may run out of disk space while recording, or the disk may be bad and unable to read, etc. One function that can be used in conjunction with ferror() is the perror() (print error) function, whose argument is a string that usually indicates where in the program the problem occurred.

To make random searches and accesses in files use the function fseek(). It moves the current read or write position in the file to a specified value from a specified point. Your prototype is:

The source parameter determines where the move numbytes will be counted from. Possible values are defined by macros in stdio.h

returns the current file position to the beginning.