The 15 best Conky for Linux

Its most stylish environment. 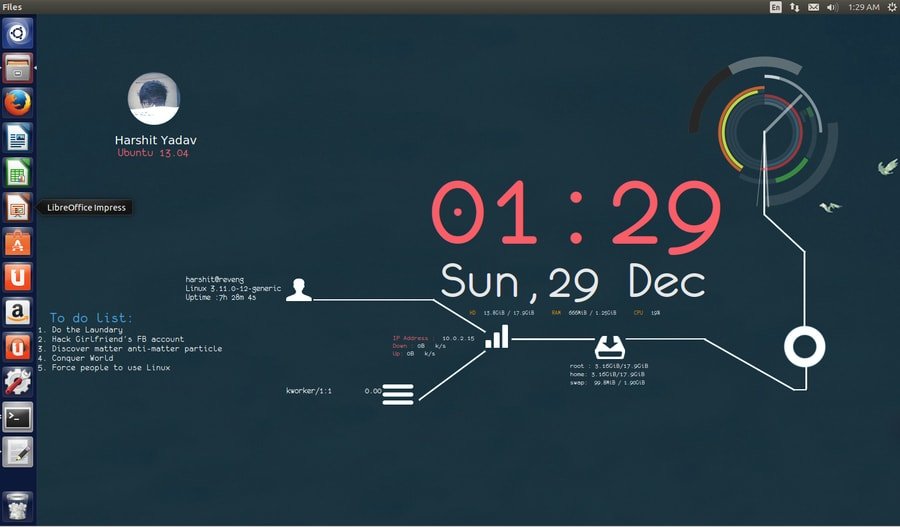 One of the things that linusers enjoy most is to customize their environment in their own way. Among resources, tools and possibilities, one of the resources that most stiffen the environment are the Conkys which are widgets that are highlighted on your desktop displaying some information from your system and have various styles. And I have separated 15 models for you.

Conky Orange is a variant of one of Conky’s most popular themed series. There are different variants of this theme by the same author, such as Conky Red, Conky Gray, etc. The elements of this theme are very modern and elegant. It shows different system parameters in the viewer similar to a round clock face. 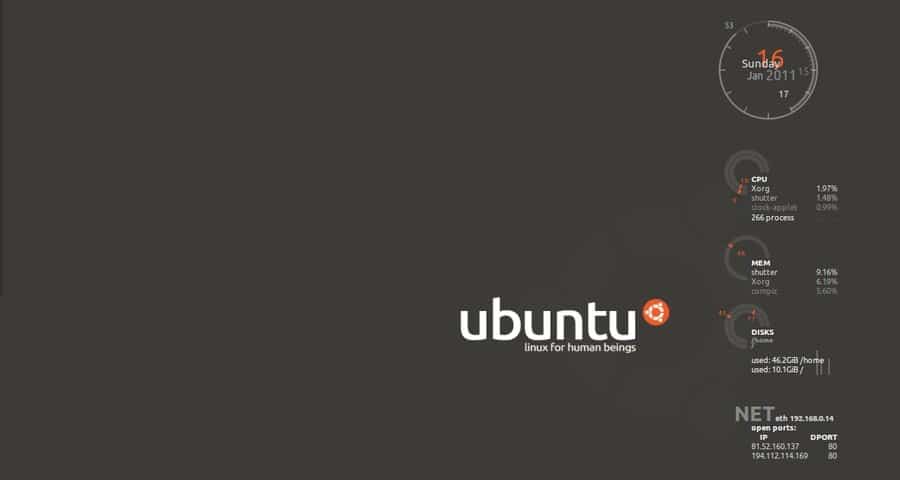 As the name required, it follows a chronograph-style design language to display different parameters of the system status. The Chronograph Station The beautiful Conky viewer looks like a modern Swiss chronograph watch. Shows the time, date, CPU activity, memory usage, temperature and other aspects of the system within the watch face. 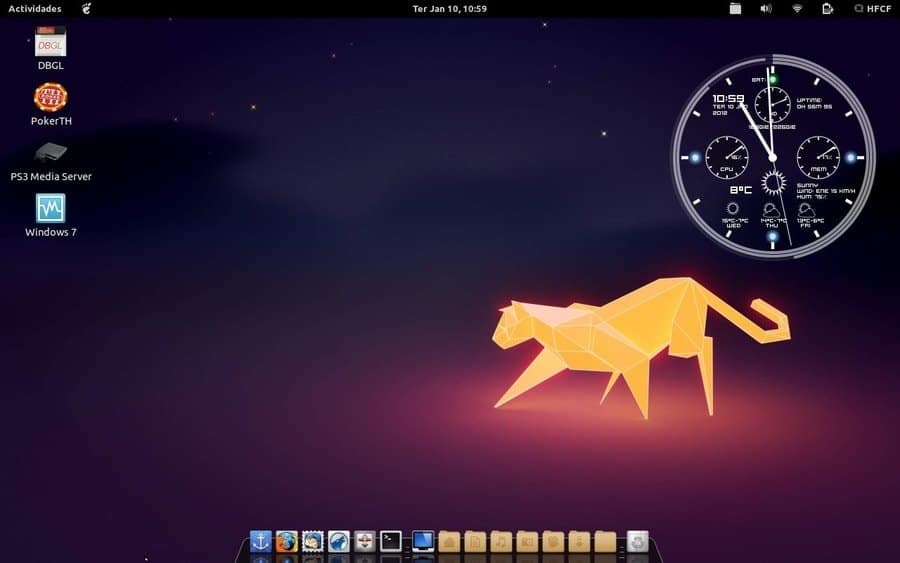 Get the Conky Chronograph Station

Conky Colors is a beautiful Conky theme with a modern user interface. You can set up different colored accents to match your wallpaper. The standard white theme is always here, which looks elegant. The main feature of this theme is the use of different contextual icons. The set of elements defined will be with parameters such as music, IP location, calendar, etc.

This is a very old theme for Conky. It was last updated almost nine years ago. But this Conky looks so cool and functional that it can’t be left out of the list. This theme has a futuristic aspect painted on it. When you install it on your desktop, you will have the feeling of working on alien technology, just like you see in some Hollywood sci-fi movies. 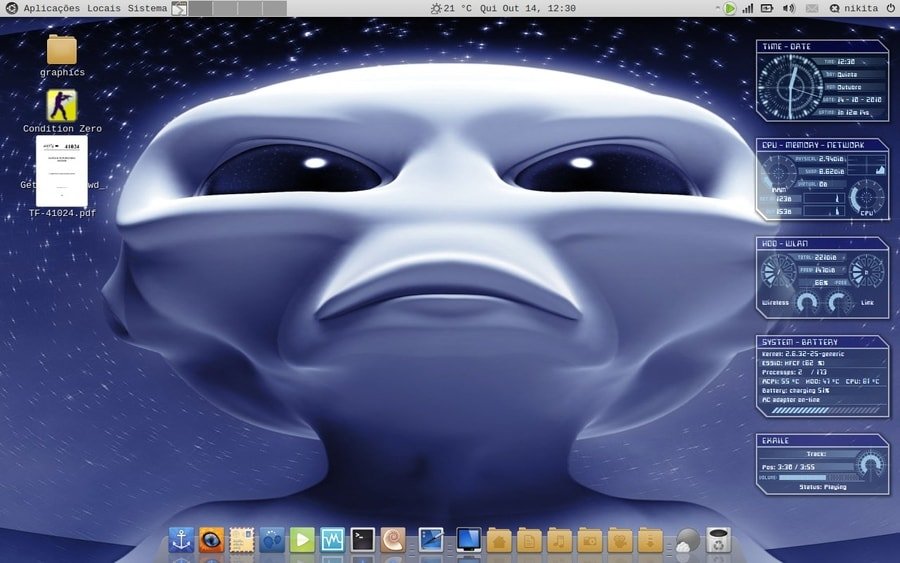 AutomatiK is a Conky theme that you don’t need to configure by opening the Conky script file. This theme automatically checks your computer’s hardware components and configures Conky accordingly. Everything happens automatically, and that is the main feature of this theme.

Supports multiple languages, including, French, Italian, German, Portuguese, etc. and translate the Conky components into your language when you need them.

The graphic elements and a general user interface are very bold and beautiful. The main aspect of this theme is the integration of some Google services. It can show upcoming events on your Google Calendar. You can also manage your to-do list created with another popular Google Keep app with this theme right on your desktop. 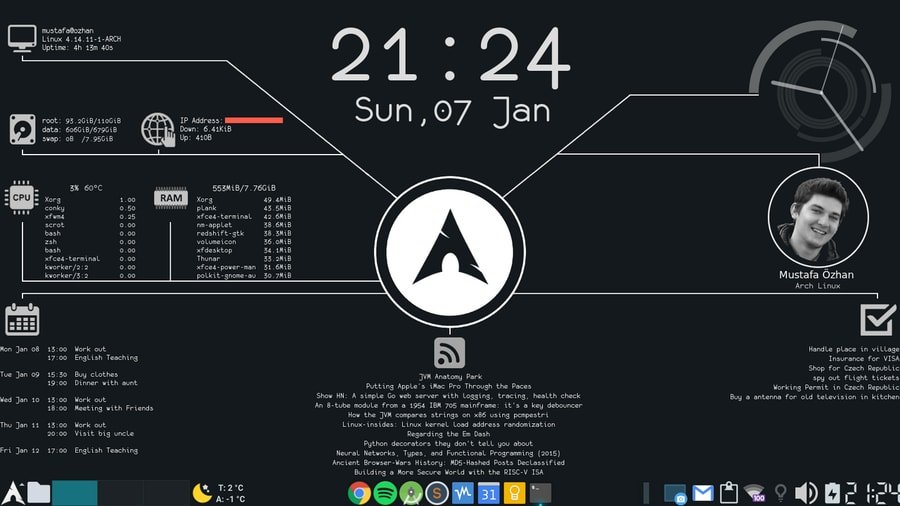 This theme uses many visual elements and icons to give a completely futuristic look. Some of you may find it to be a somewhat complex setup. But you can configure it according to your needs and make some spaces. 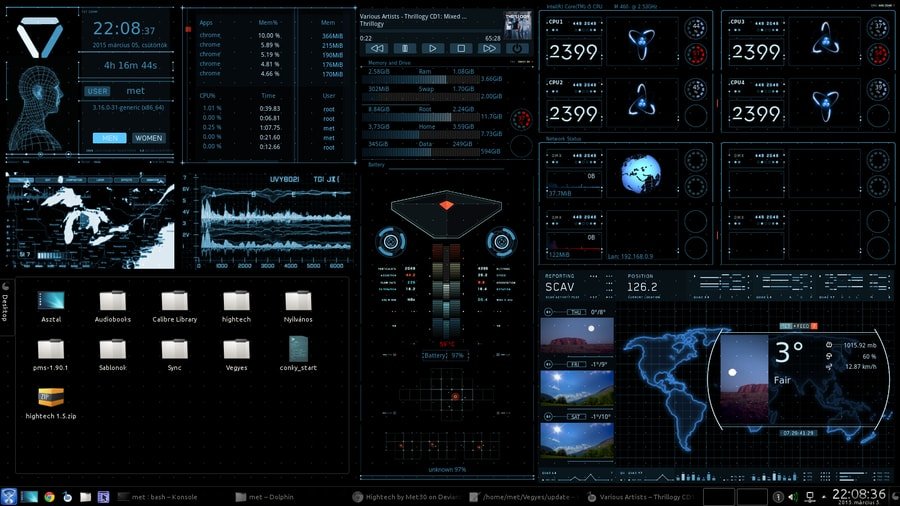 Get the Hightech Conky

Setting it up with a clear desktop background and clear theme brings a comforting look to your Linux machine. This theme will show all parameters and relevant in dynamic rings. 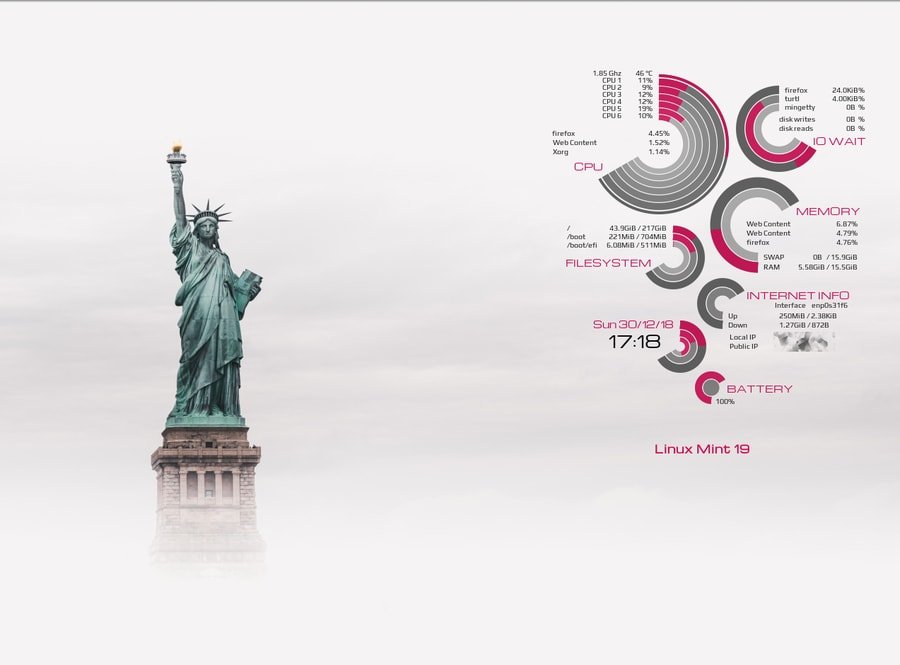 This is a useful Conky theme with a simple desktop calendar. There are different other themes available that can show the time and date. But those who want to see a full day view of the calendar will love this Conky. It was a personal project from the developer to his friend. Later, however, he gained a lot of popularity and he uploaded it for public use. 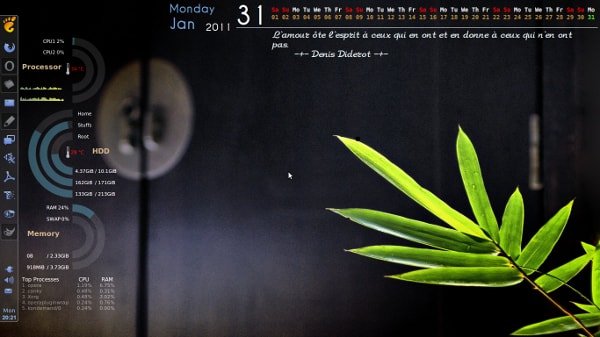 Get the Conky Calendar

This is another watch for Conky. It will show the current time and date on a chronograph-style watch. There are several other small clocks within the larger one to show CPU usage, memory status and storage capacity. This Conky has a minimalist design that looks very clean and elegant. 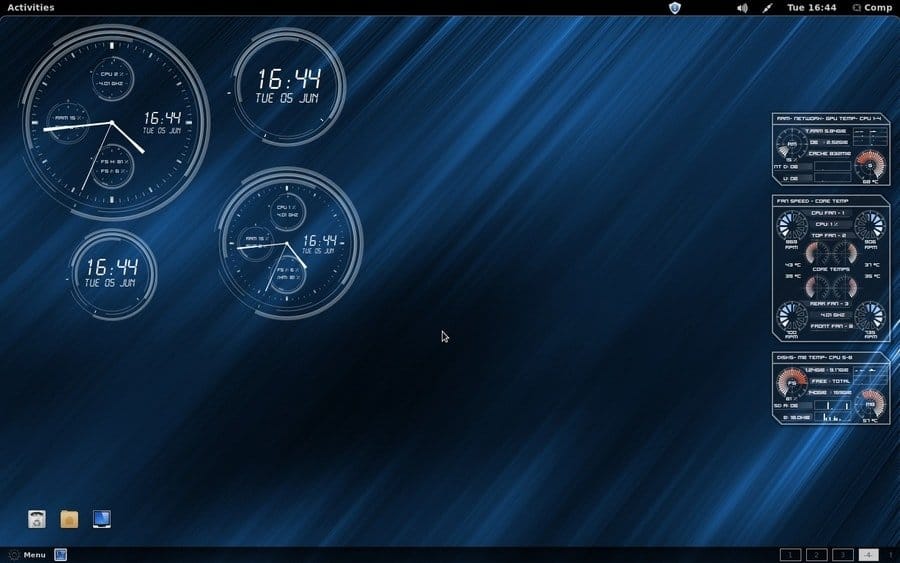 Get the Conky Revolutionary

If you are designed to see the same old rounded user interface for most Conky themes, then this theme should be in your favor. Victor Conky has unconventional hexagonal visual elements. It features some powerful widgets for displaying computer statistics. This theme shows the time, date, processor load, memory usage and so on. 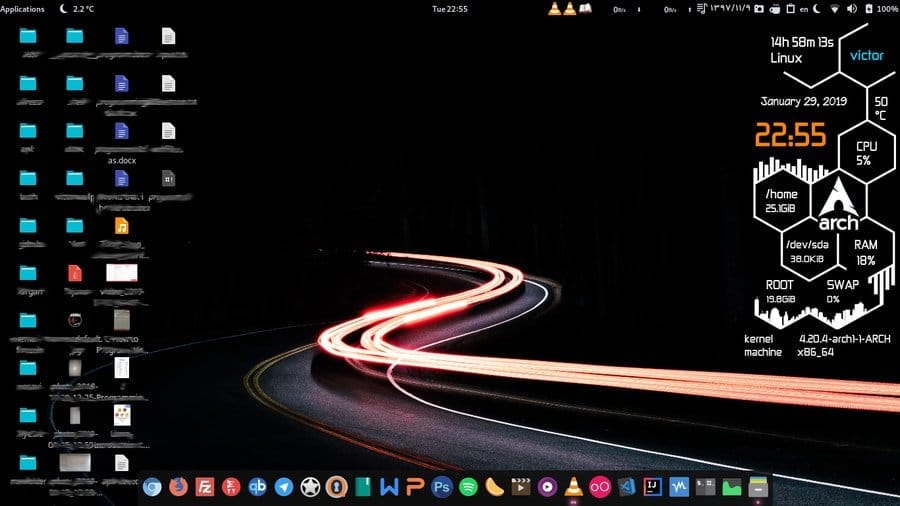 This Conky for Linux theme resembles an aircraft’s Heads Up Display or HUD. The visual elements have a futuristic appearance painted on them. Perhaps these aspects have led the developer to name it so. Anyway, the theme has a little complexity in the user interface. But the general configuration is very polished. That’s why it has become one of the most beautiful themes available for configuring your Conky. 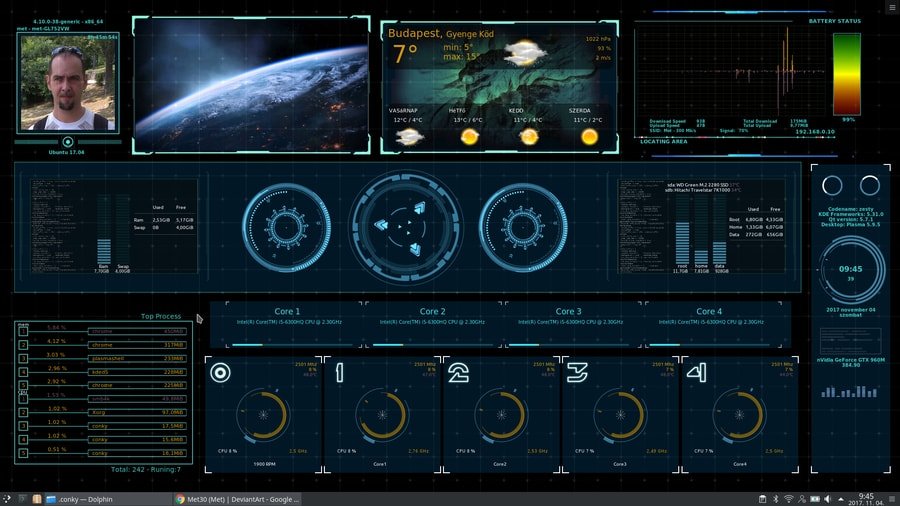 This is an elegant-looking Conky. I thought it was not possible to find a Conky theme that was minimalist and beautiful at the same time. But this Conky proved that I was completely wrong. Many of you, including me, want this type of Conky, which does not take up much space on the desktop, instead of showing all the useful parameters in easily readable text.

Do not get confused with the name. Because this theme will not display the equalizer on your media player or allow you to adjust the ups and downs of the music that is playing. Instead, it will display common system status parameters with a few vertical bars that look exactly like an equalizer view. 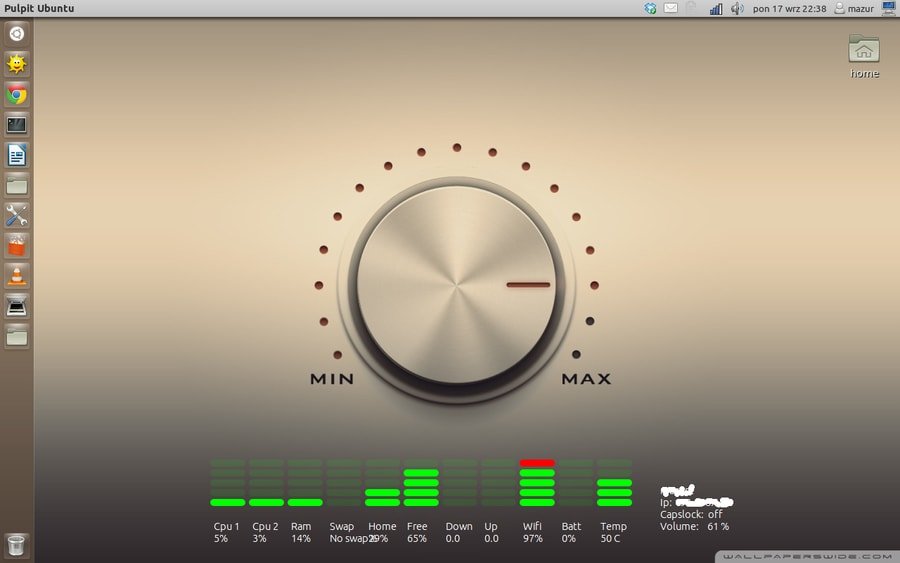 Get the Equalizer Conky

Infinity Dark is a beautiful Conky that prioritizes the time and date. The developer included the Monofur font face with this theme, which makes the date and time even more vibrant. This theme uses the Entypo icon set to view disk usage, network activity, etc. It also shows CPU load, RAM usage and system uptime.

Well, many of you must be saying and asking yourself: - This list is really cool, but how do I install each one? Simple, in the links of each one there is the procedure, as well as inside the compressed file there is a Readme that can help you.

This article was based on the UbuntuPit article .