The 25 Best Tiling Window Manager for your Linux

And 2 more bonuses for those using macOS or Windows. 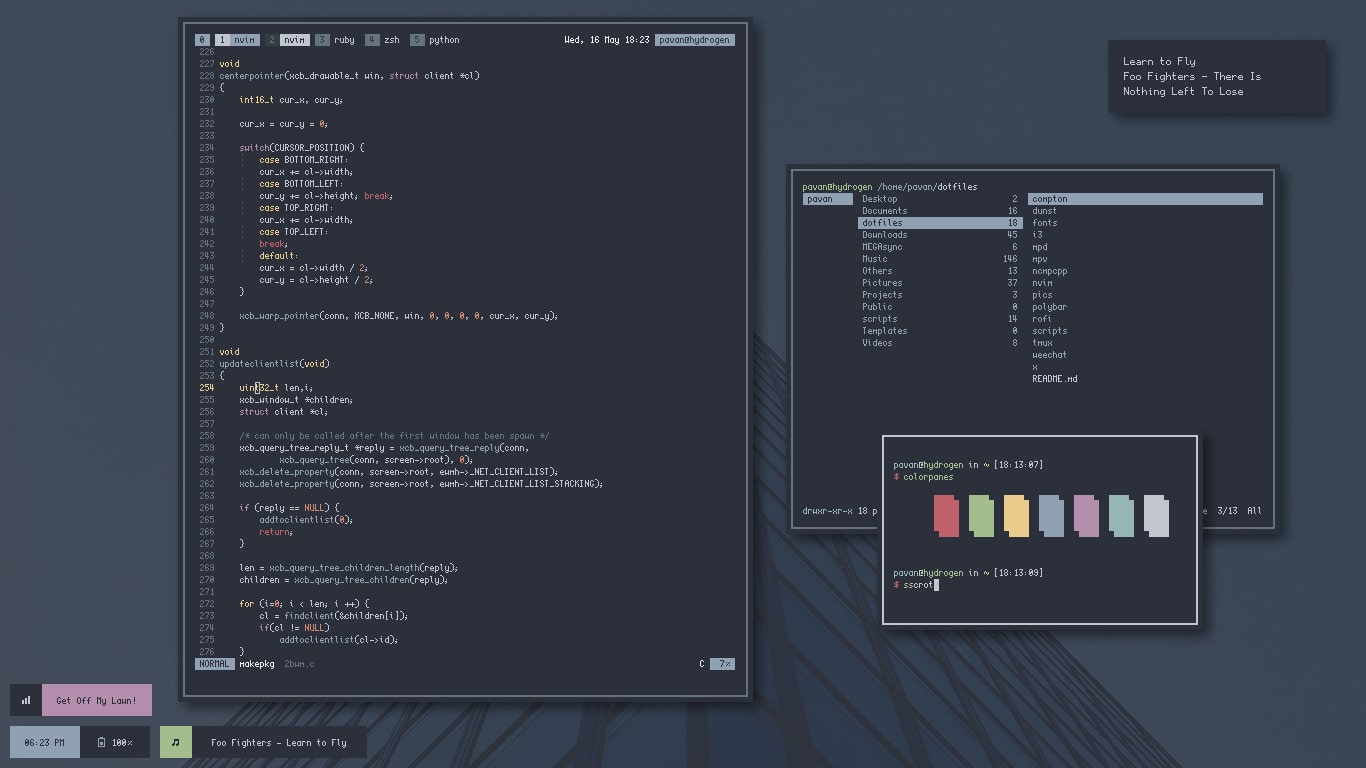 Tiled window manager is a window manager with an organization of the screen in frames that do not overlap, as opposed to the most popular approach of stacking based on coordinates of overlapping objects that tries to fully emulate the desktop metaphor.

They consume much less system resources when compared to Graphical Interfaces, such as: KDE, GNOME, XFCE and others.

In this article we go to the top 25 and 2 more bonus tips at the end!

bspwm represents windows as the leaves of a complete binary tree. It responds only to X events and messages it receives in a dedicated socket.

bspc is a program that writes messages to the bspwm socket. bspwm does not handle any keyboard or pointer input: a third party program (for example, sxhkd) is required to translate keyboard and pointer events into bspc invocations. 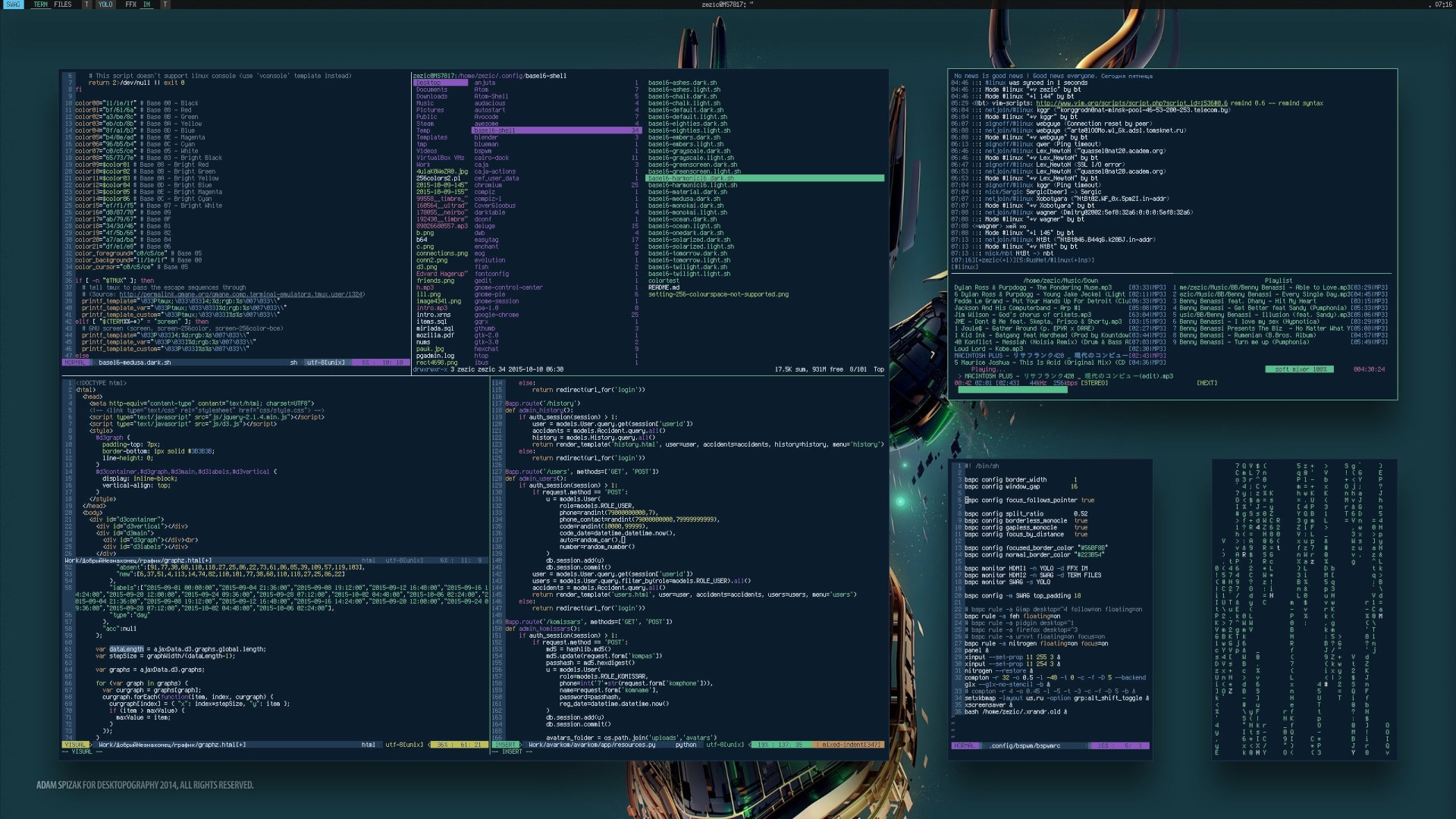 I3wm was written entirely from scratch. The target platforms are the GNU/Linux and BSD operating systems. It is Free and Open Source Software (FOSS) under the BSD license. The i3 is mainly aimed at advanced users and developers. It was based on the window manager: wmii. 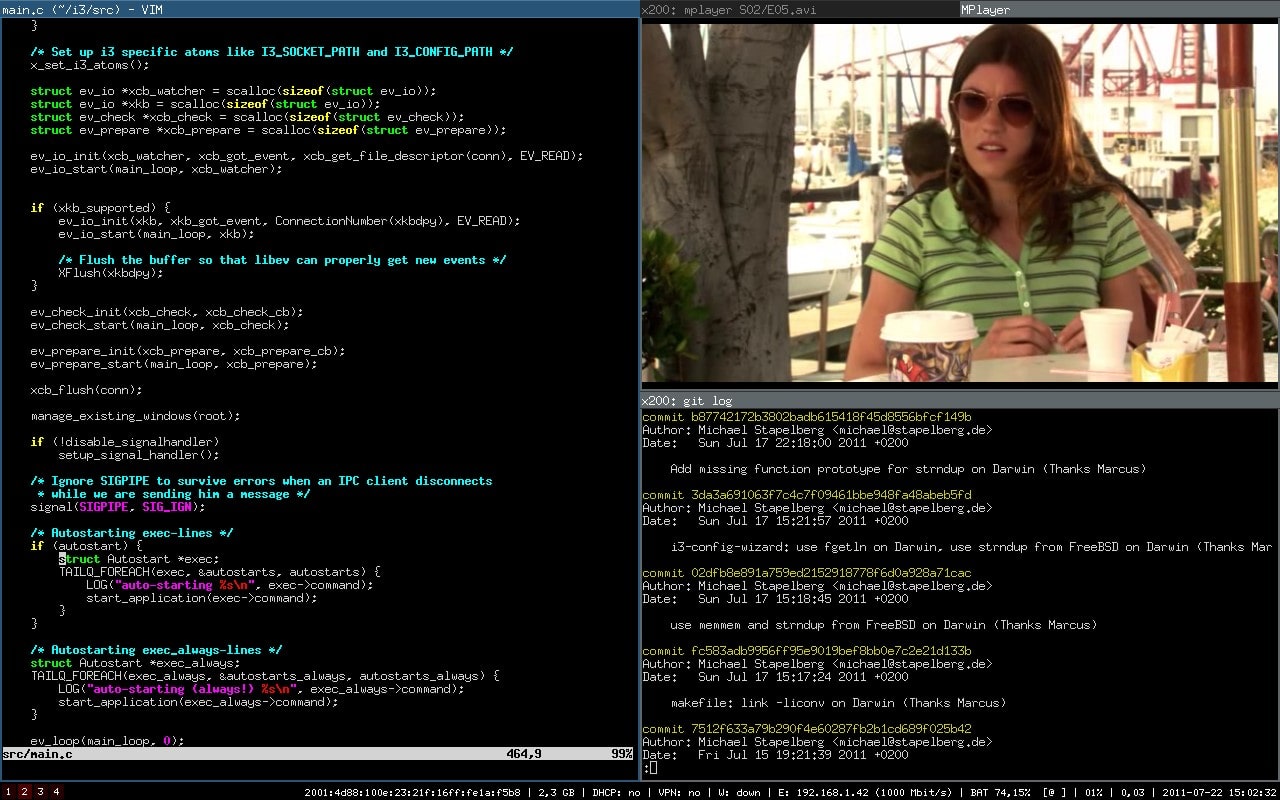 Dwm manages windows in tiled, monocle and floating layouts. All layouts can be applied dynamically, optimizing the environment for the application in use and the task performed. 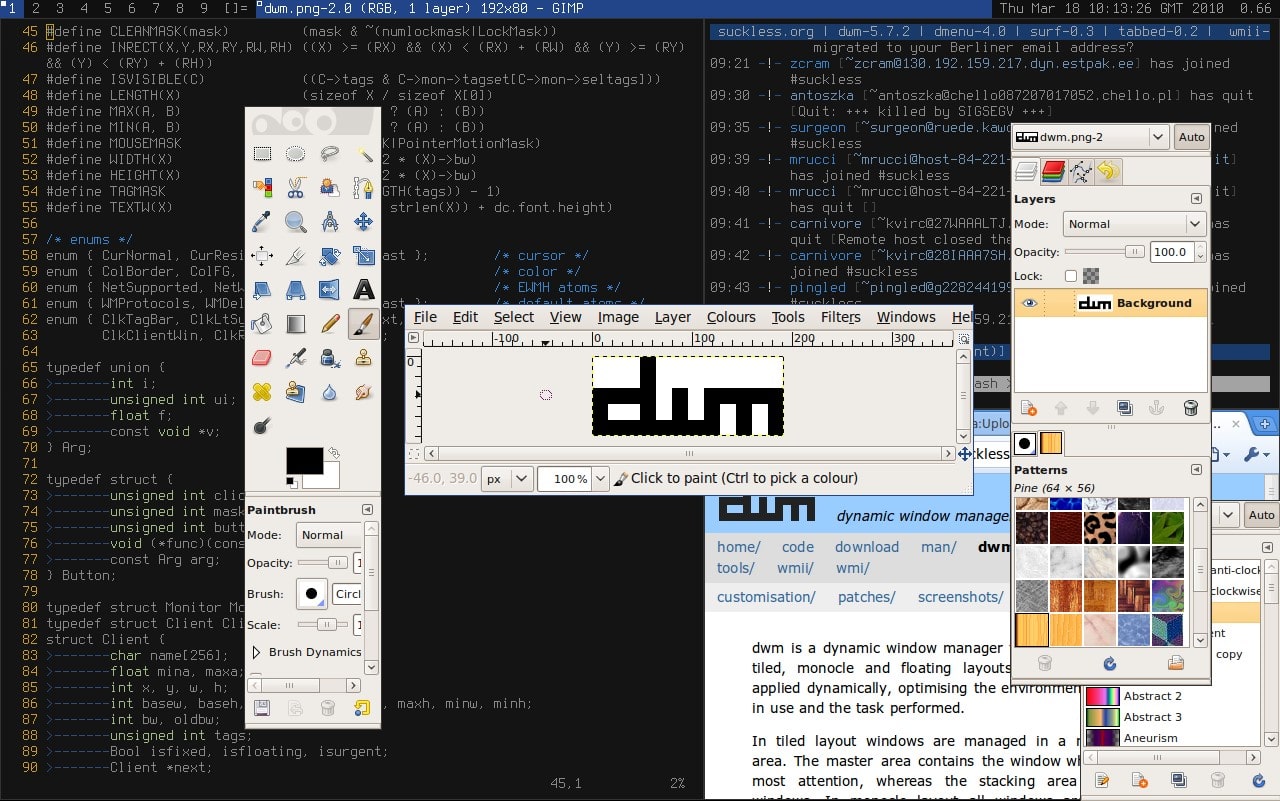 Openbox is the latest generation highly configurable with extensive support for standards. The visual style is known for its minimalist appearance. Openbox uses the visual box style, while providing a greater number of options for theme developers than previous * box implementations. The theme documentation describes the full range of options found in Openbox themes. 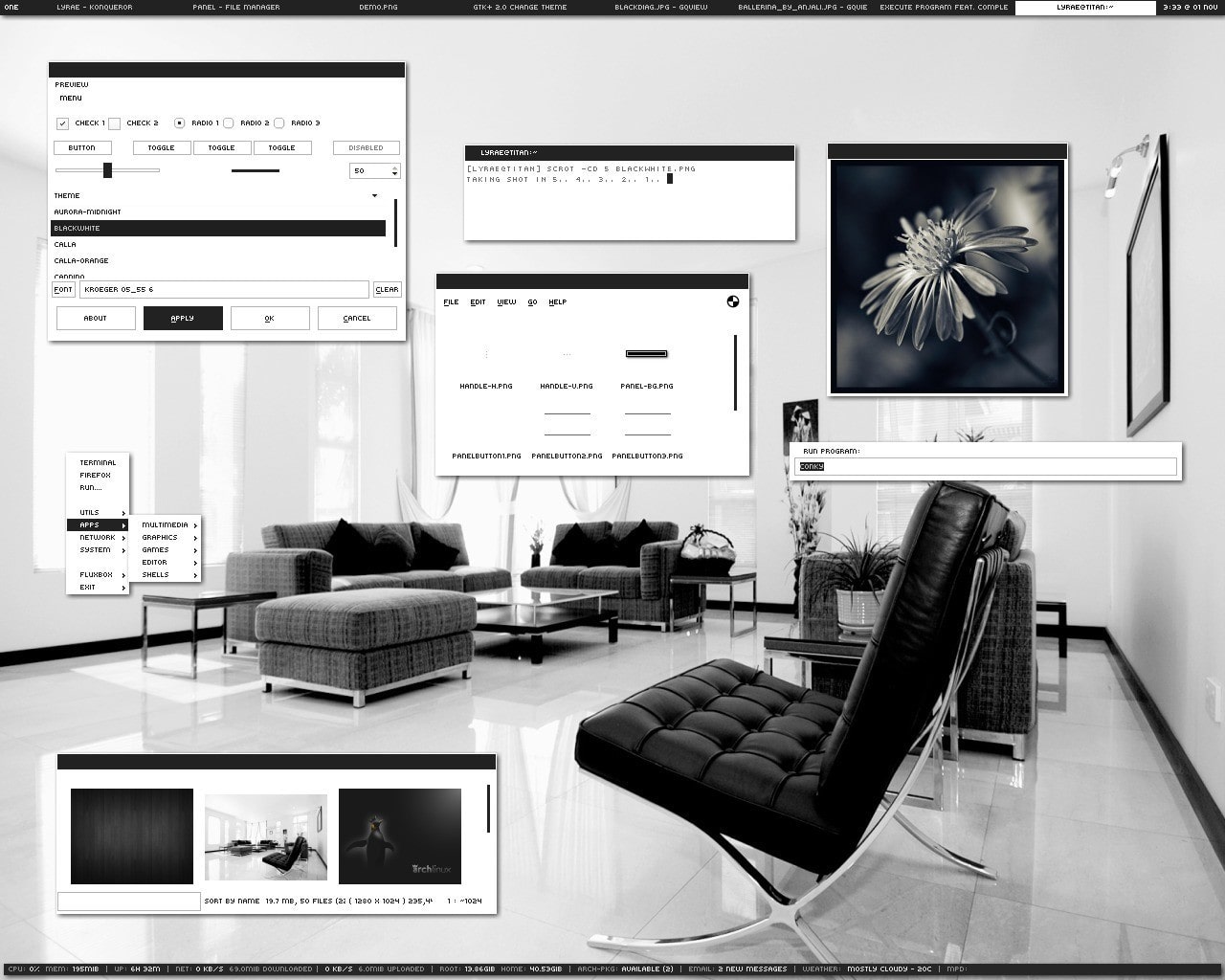 It is very fast, extensible and licensed under the GNU GPLv2 license. It is mainly aimed at advanced users, developers and anyone who deals with everyday computing tasks and who wants to have a refined control of their graphic environment. 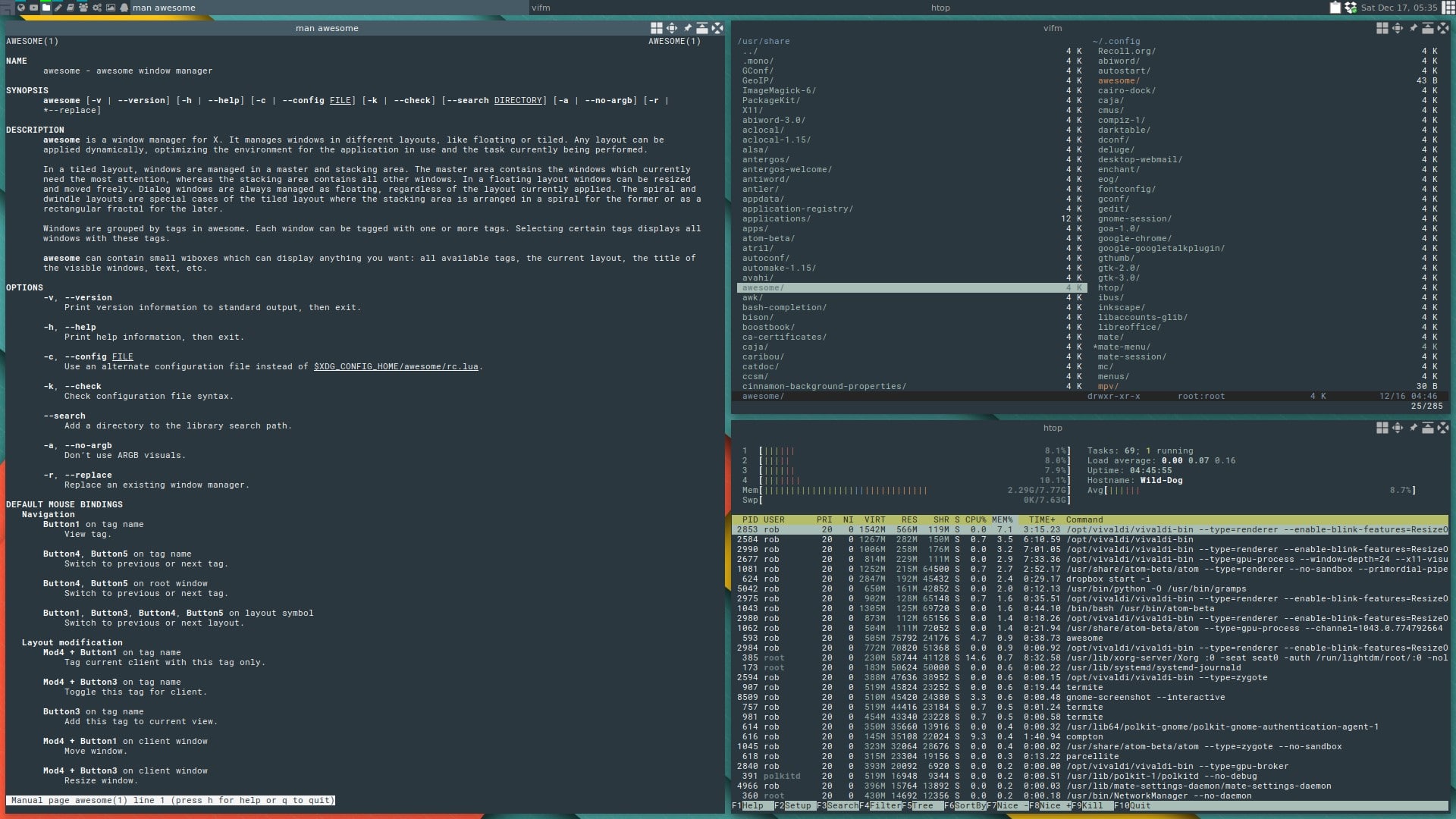 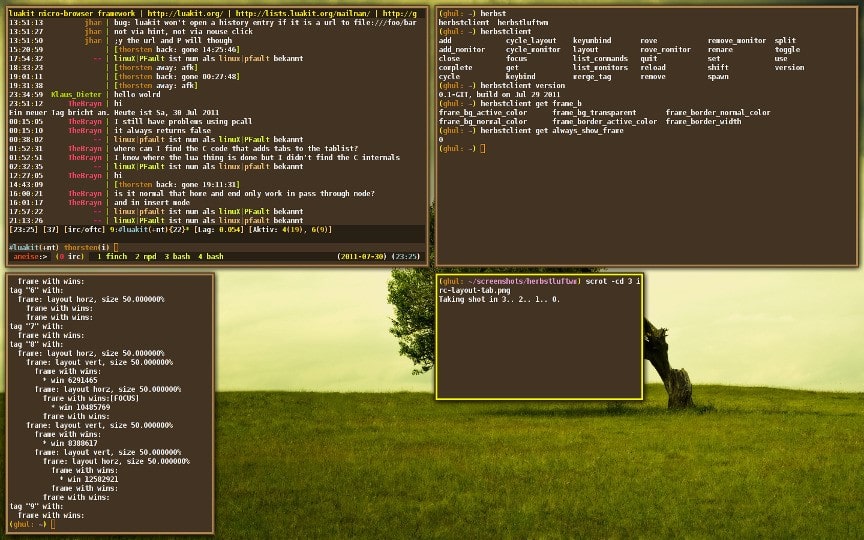 It is written and configured in Haskell. In a normal WM, you spend half your time lining up and looking for windows. Xmonad makes work easier by automating this. 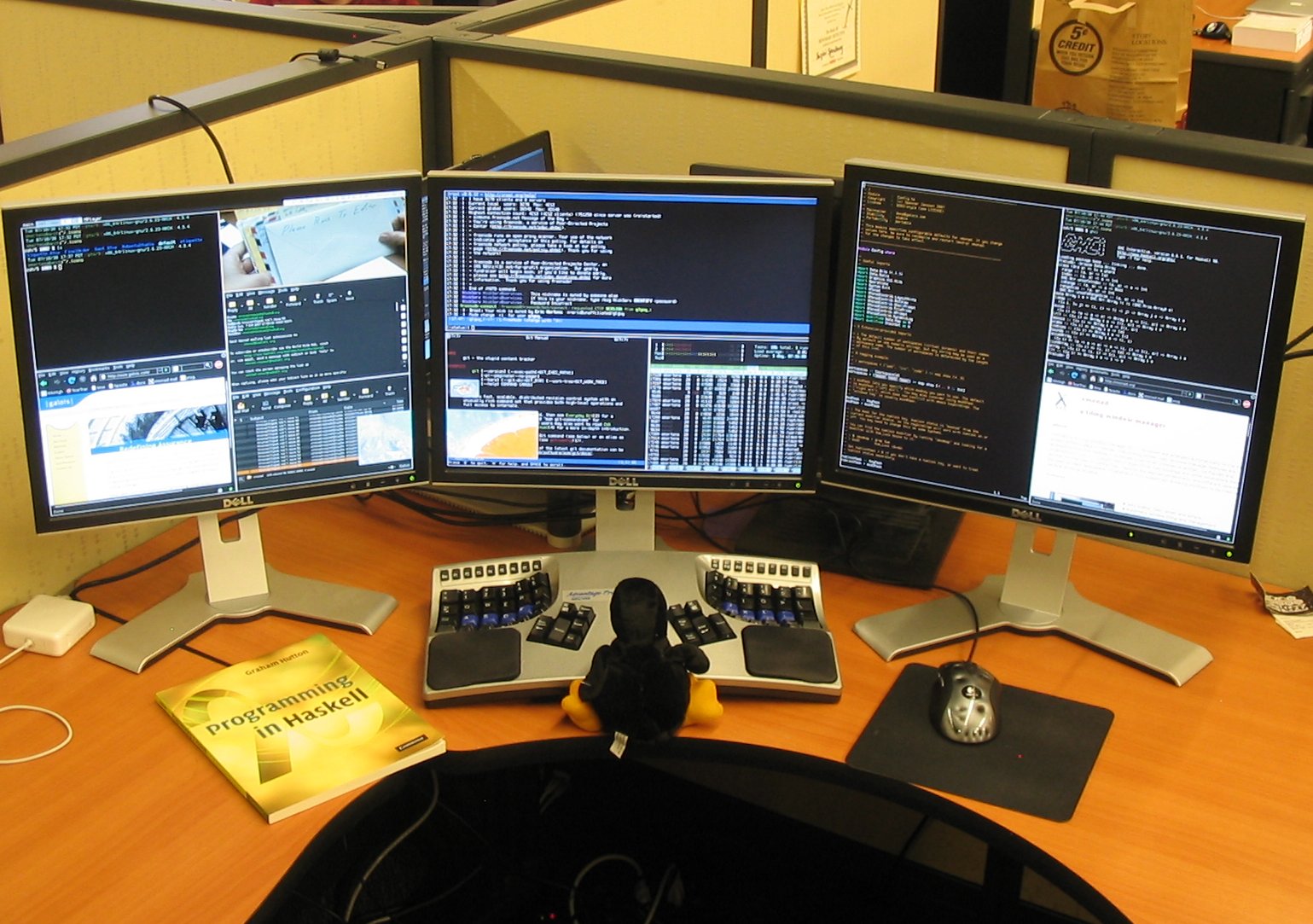 Sway is a Wayland composer and a replacement for the X3 i3 window manager. It works with your existing i3 configuration and supports most i3 features, plus a few extras. 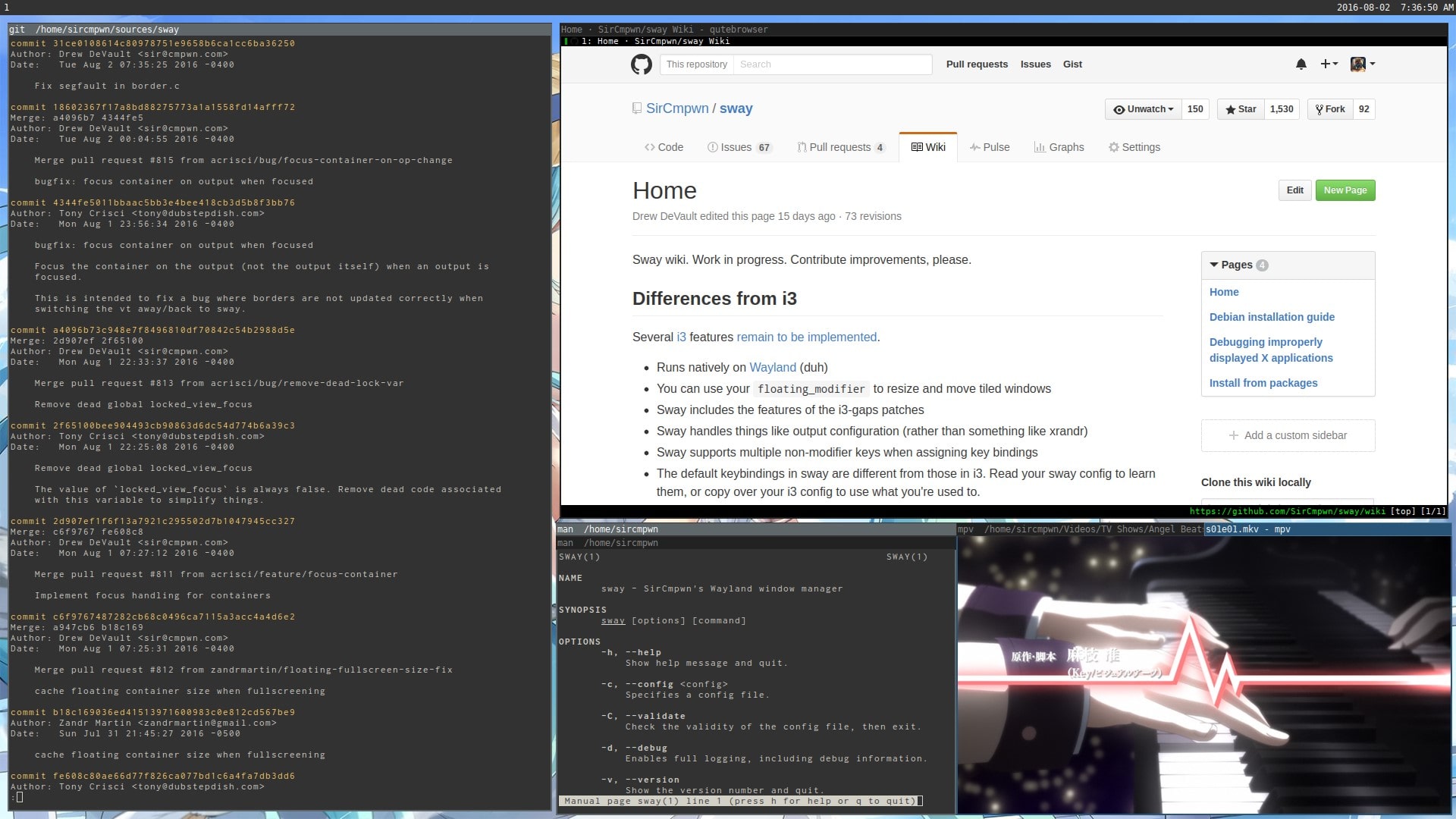 Qtile is written in Python. It is simple, small and extensible. It’s easy to write your own built-in layouts, widgets and commands. 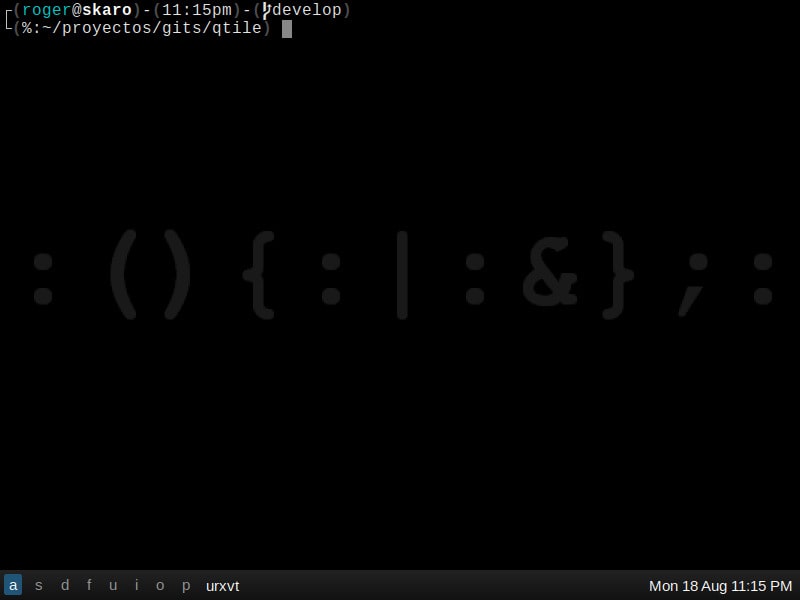 It is written in C and uses only Xlib, at a minimum. Because of its small size, JWM is a good window manager for older computers and less powerful systems, such as the Raspberry Pi, although it is perfectly capable of running on modern systems. JWM is included in small Linux distributions, such as Small Puppy Linux and Damn Small Linux, and is available as a separate package in many other distributions.

Ratpoison is a simple window manager, without large library dependencies, without sophisticated graphics, without window decorations and without a mouse dependency. The screen can be divided into non-overlapping frames. All windows are kept maximized within their frames to make the most of your precious screen space. All interaction with the window manager is done using keys. 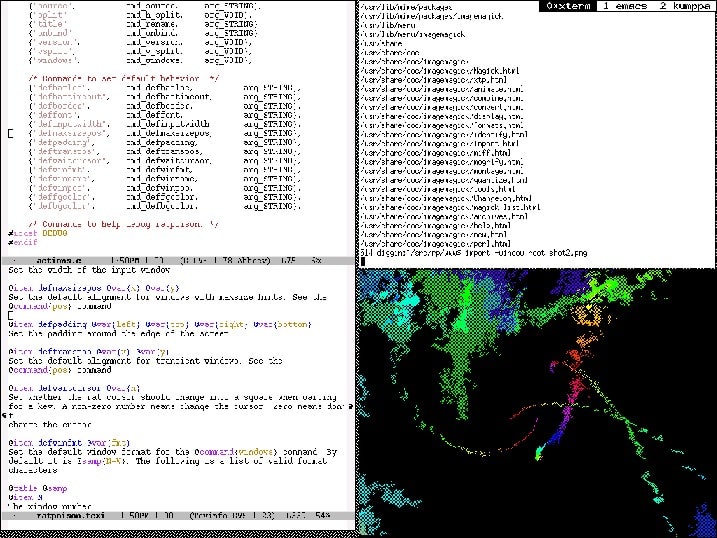 It used to be based on the aewm++ window manager, but it has evolved enough to not look like aewm++ anymore. It has a very expanded feature set, including window grouping (similar to ion, pwm or fluxbox), autoproperties, xinerama, keygrabber and more. 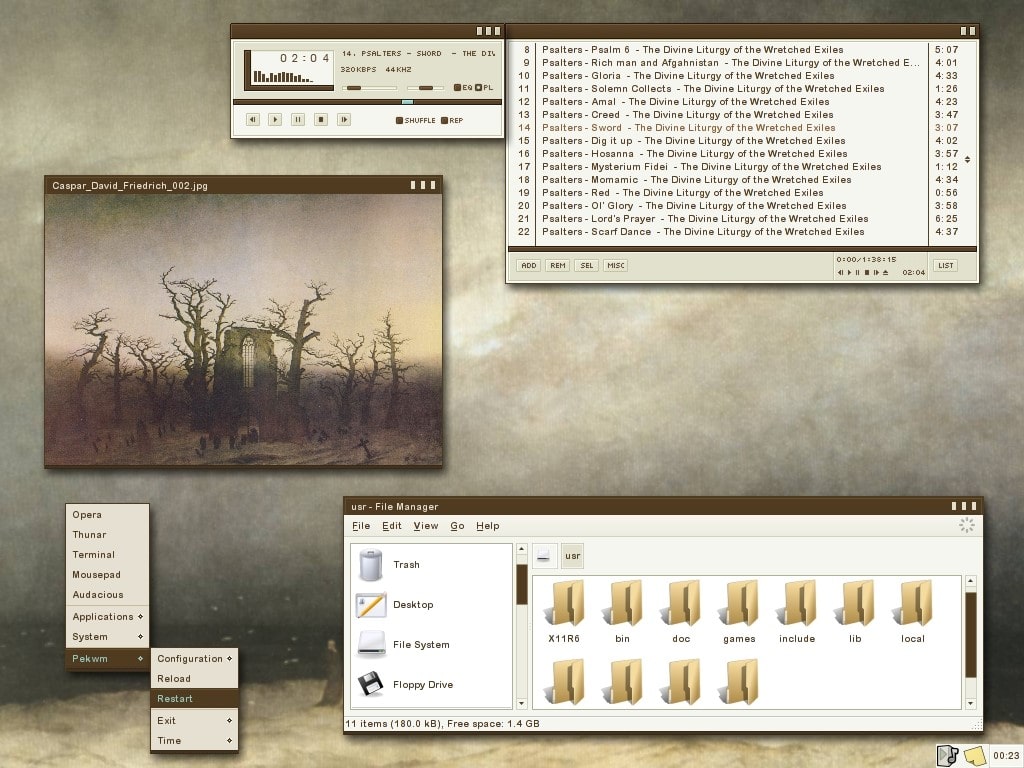 It is written in Rust. 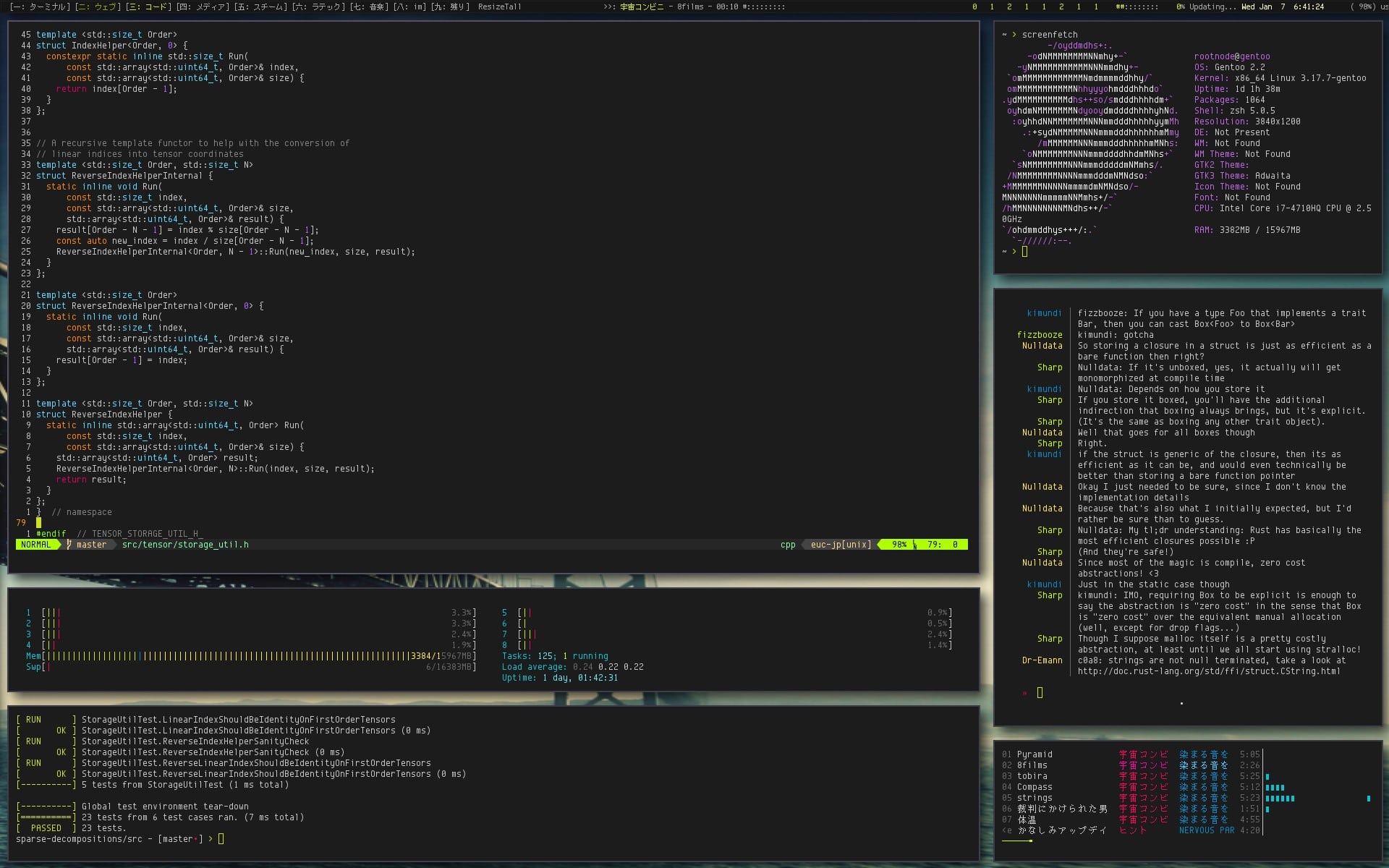 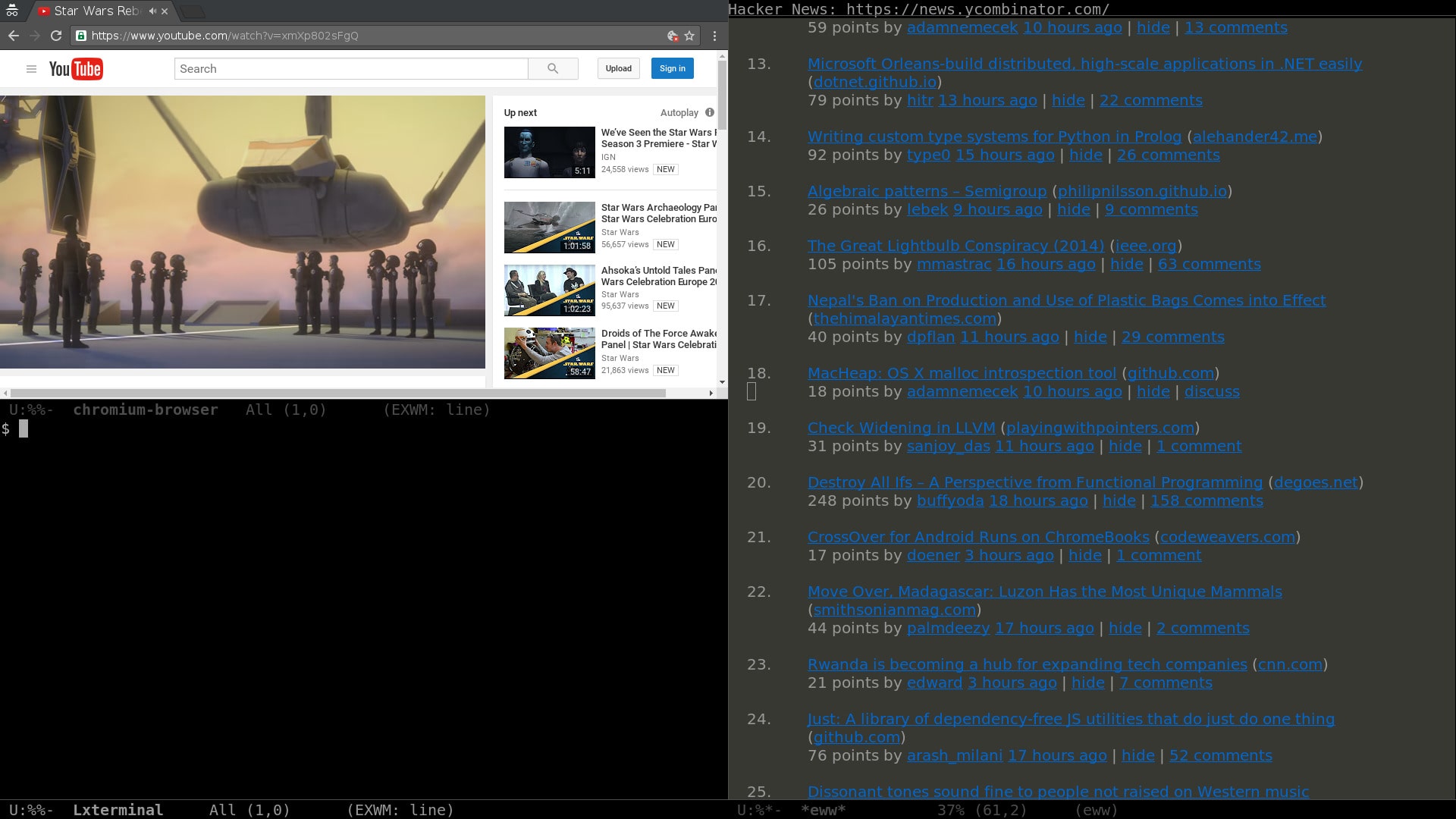 A fast floating WM, with the particularity of having 2 edges, written on the XCB library and derived from the mcwm written by Michael Cardell. In 2bWM everything is accessible from the keyboard, but a pointing device can be used to move, resize and zoom in/out.

Based on the Blackbox code 0.61.1. It is very light in features and easy to handle, but still full of features to make a desktop experience easy and extremely fast. It is built in C++ and licensed under the MIT license. 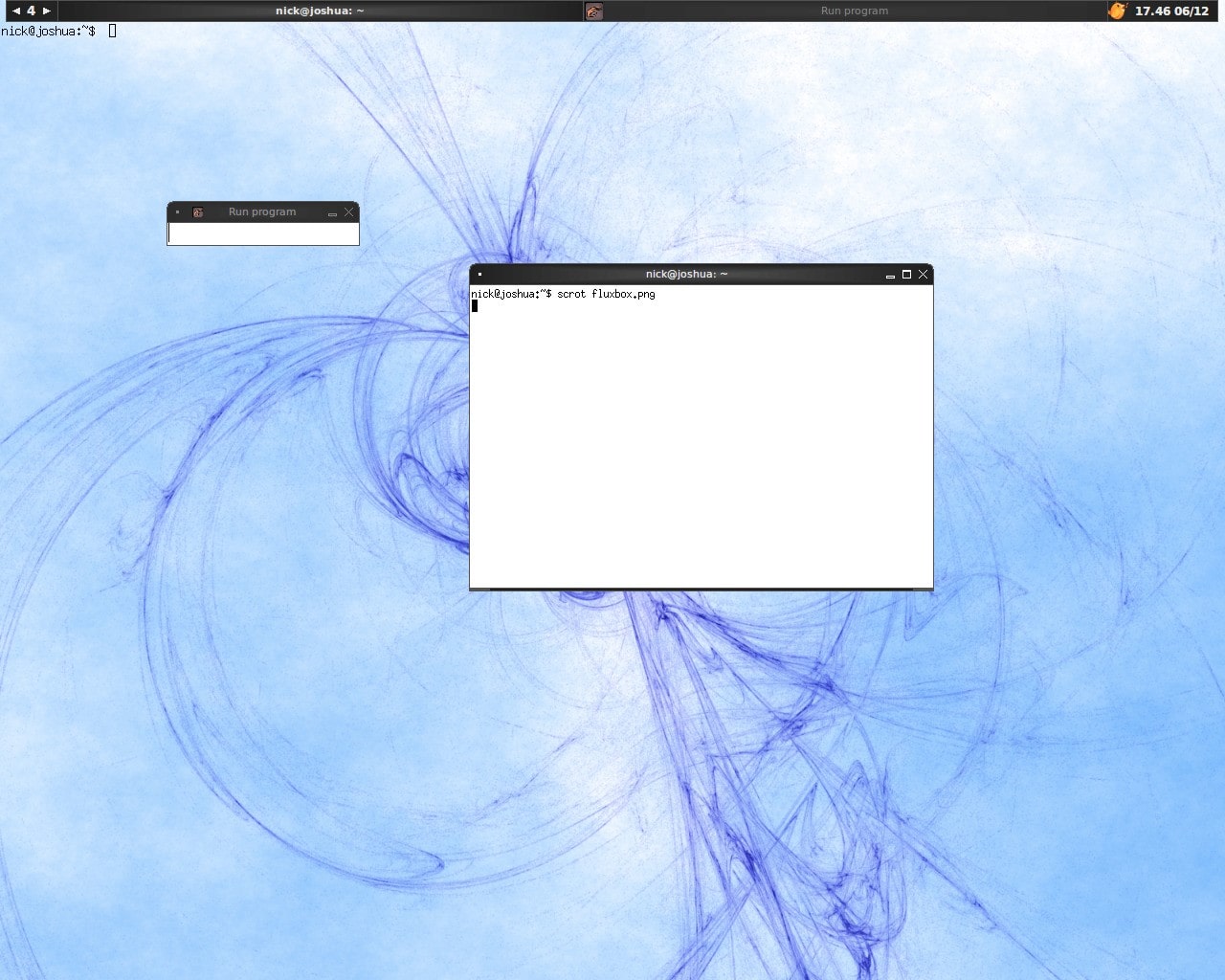 Designed to integrate with the GNOME desktop environment. It provides a traditional stacking layout mode as well as tile layouts, where windows are arranged to use the entire screen without overlap.

The goal of IceWM is speed, simplicity and not to disturb the user. 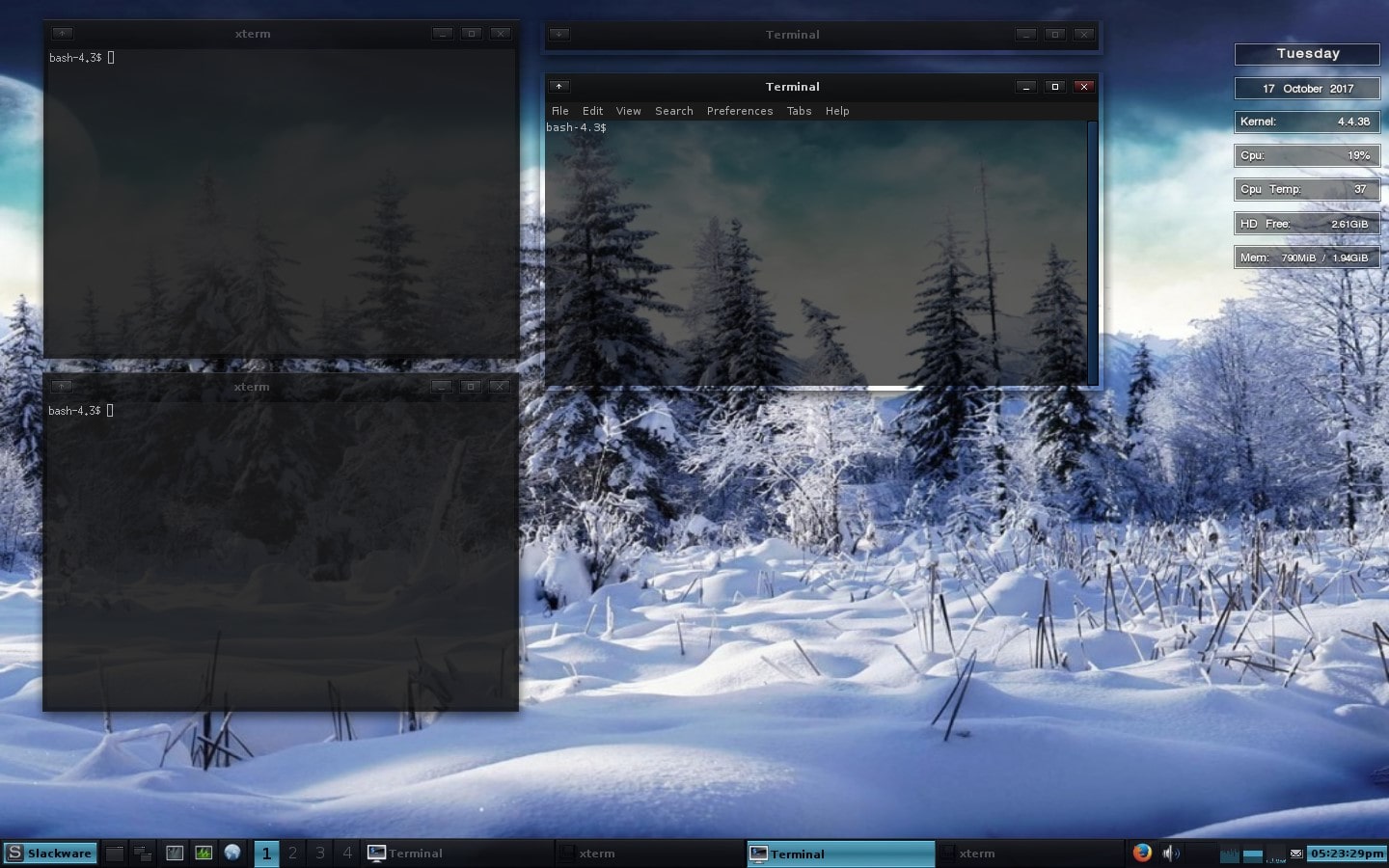 It is programmable, has a 9p file system interface and supports the management of classic and tiled windows (similar to acme). Your goal is to keep a small and clean code base (read hackerable and beautiful). 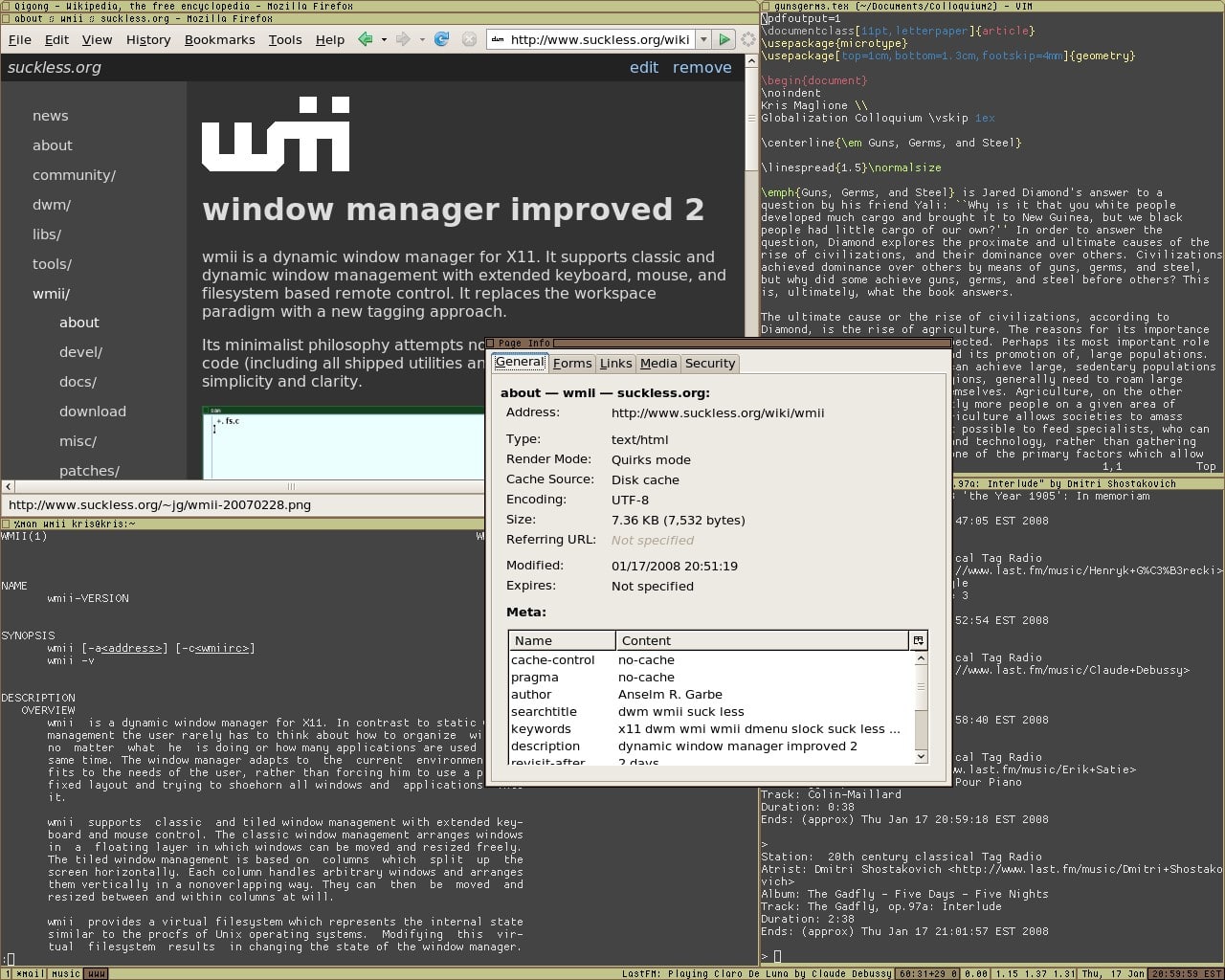 He tries to stay out of the way so that valuable screen space can be used for much more important things. It has logical standards and does not require you to learn a language to make any settings. It was written by hackers for hackers and strives to be small, compact and fast. 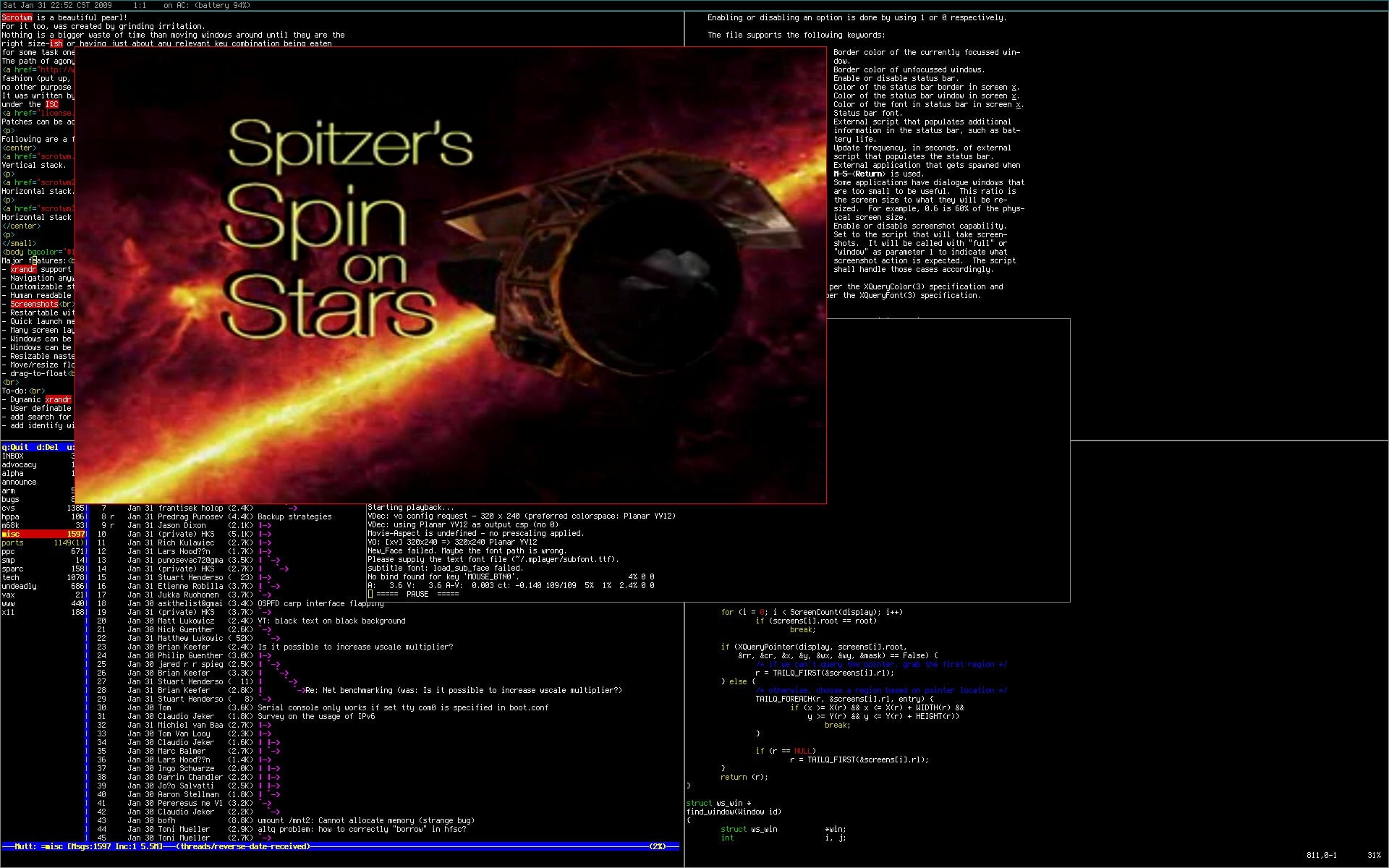 Fast Light Window Manager is a small stackable FLTK-based window manager written in C++ and available for redistribution under the terms of the GNU General Public License. 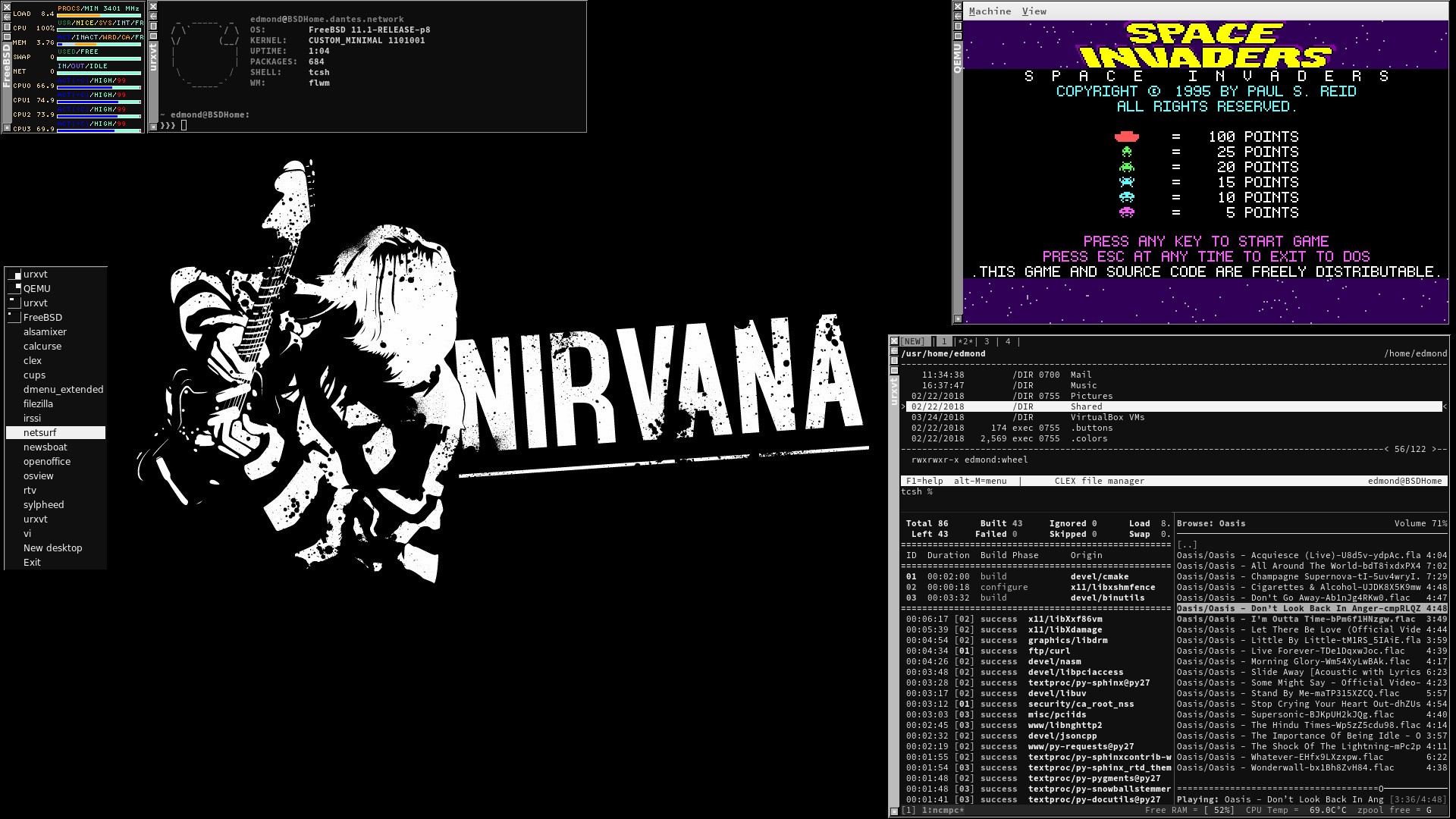 Way Cooler is a window manager from Wayland, written in Rust, configurable using Lua and extensible with D-Bus.

Strongly inspired by i3wm. Wmderland aims to simplify the main functionalities of i3wm and to group the essential resources needed for a modern, but minimal mosaic window manager. Written in C++ using Xlib. 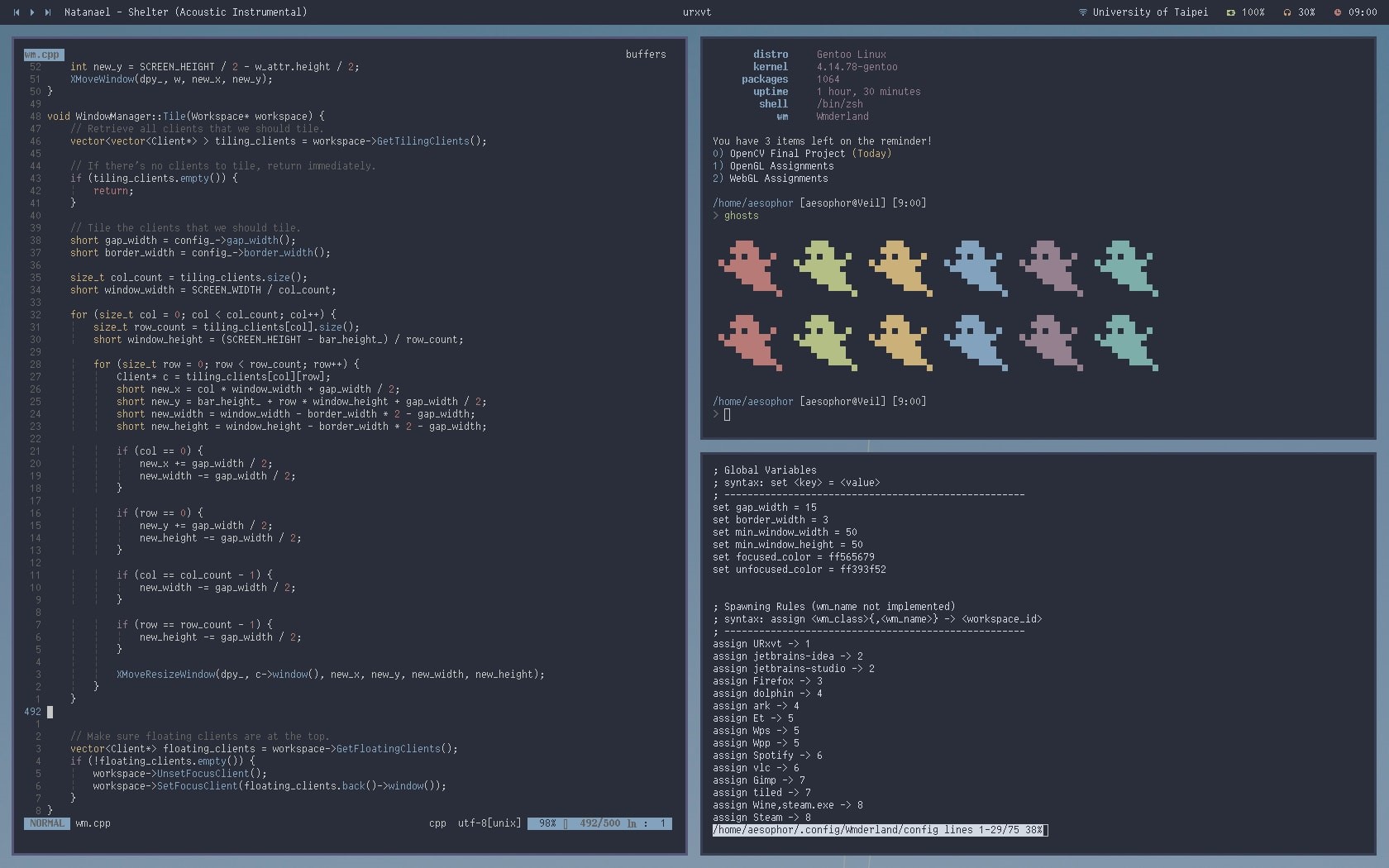 PaperWM is an experimental Gnome Shell extension that provides scrollable window tiles and workspaces per monitor. It is inspired by paper notebooks and mosaic window managers. Supports Gnome Shell 3.28 and 3.30 on X11 and wayland. 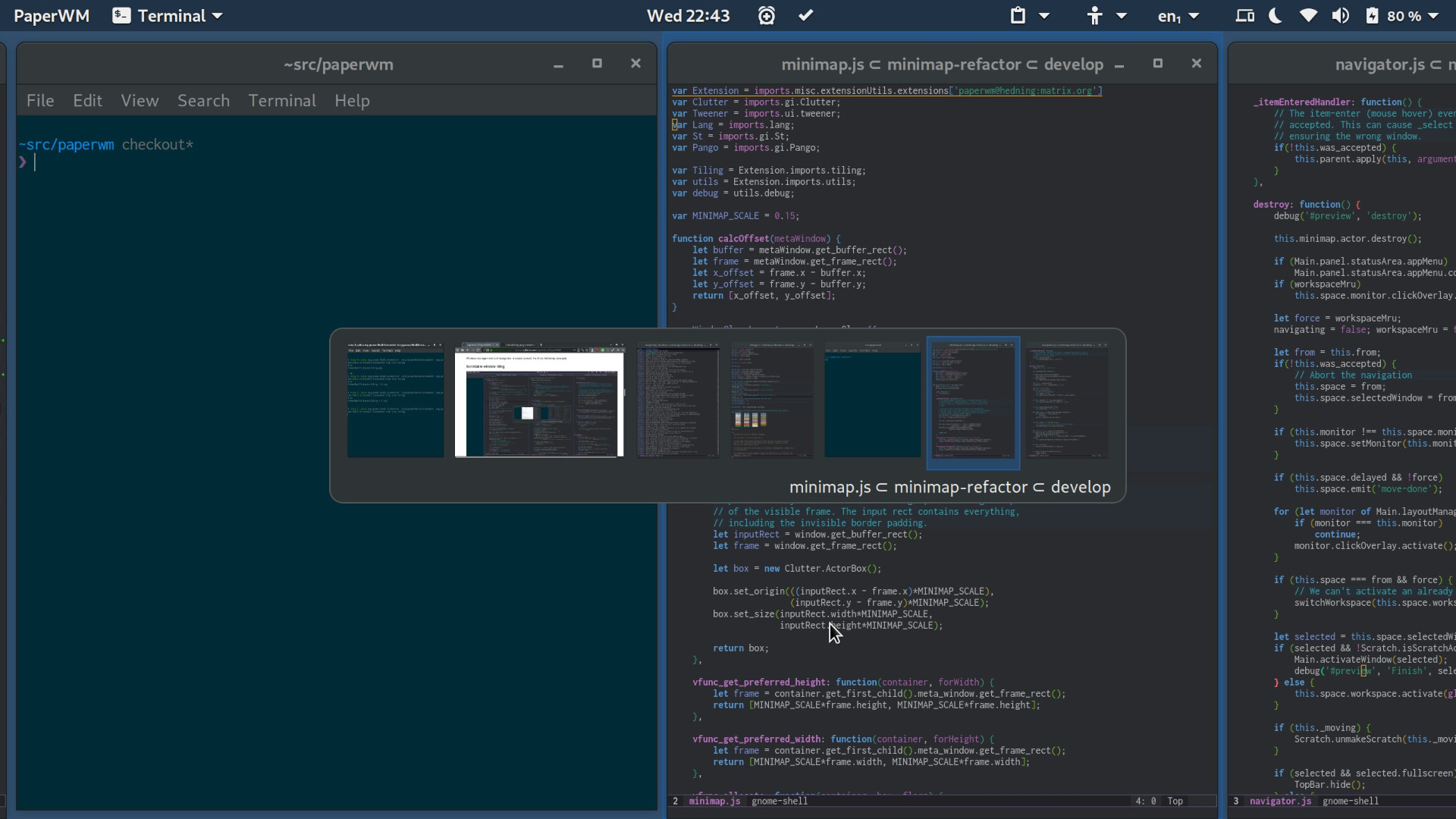 A window manager for X that is extensible with Guile Scheme. 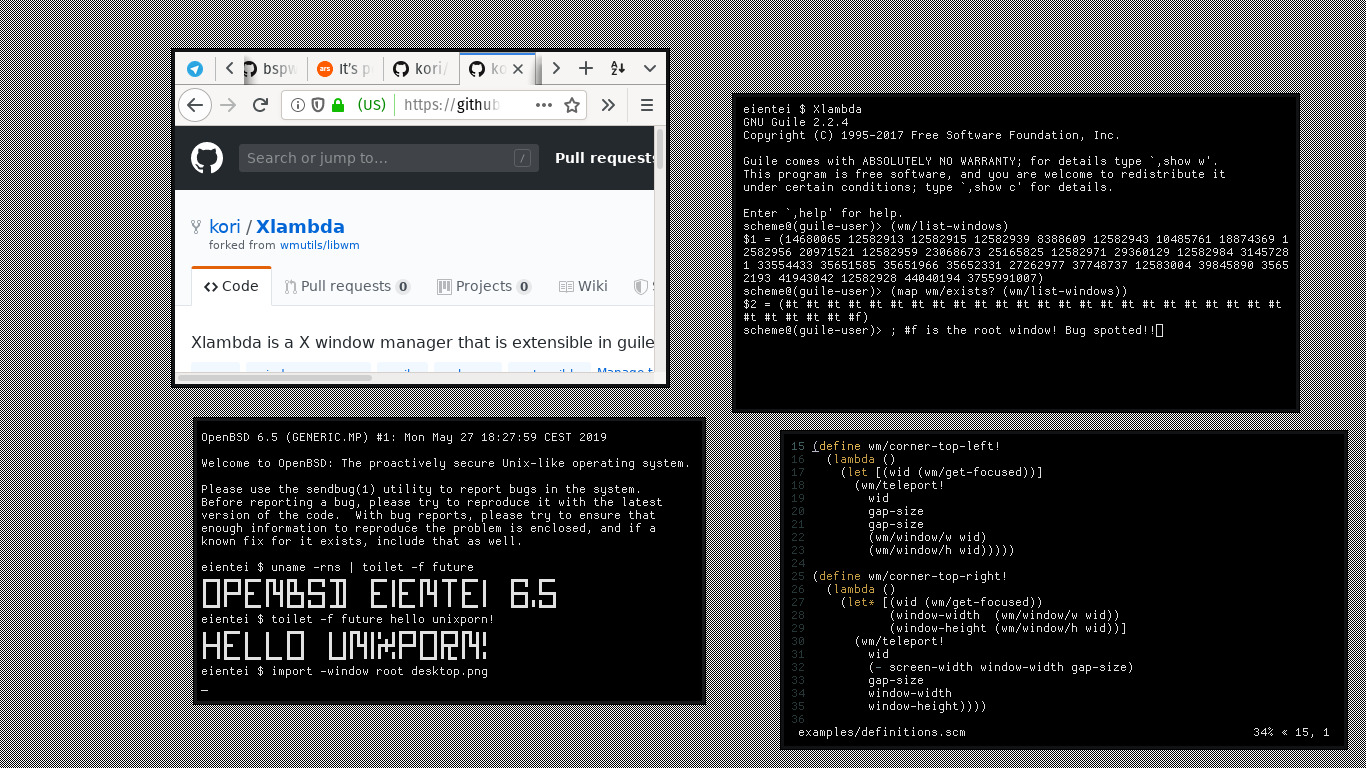 If you are interested in watching videos about some of the aforementioned WMs, I recommend these videos below. Remembering that they are in Portuguese, but the commands are universal.